Taiwanese company Acer has shown off more than 40 new products at a press event in New York City, including a gaming-centric tablet, a portable projector, three new wearables, a range of laptops and convertibles and an updated range of Predator gaming laptops and an accompanying desktop. Talk about hedging one’s bets.

It’s a strategy that’s worked fairly well in the smartphone and television markets for Samsung, which continues to produce products of every shape and size, throw them against the wall that is the market, and see which of them stick. Samsung exited the PC market last year, but Acer faces plenty of competition from the likes of Lenovo, Asus and Dell, to name but a few. 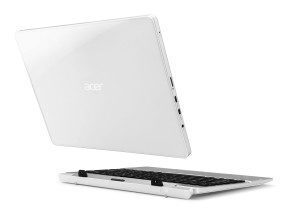 Despite stating it intends attacking the smartphone market with renewed vigour, Acer has only unveiled one major new handset, the Liquid X2. Powered by a 64-bit octacore processor the X2 has some intriguing specifications, including 13-megapixel f1.8 front and rear cameras, a massive 4,000mAh battery and not one, not two, but three SIM slots.

Acer has also talked up its forthcoming Windows Phone-powered handset, the M220. Given the company’s ties to Microsoft, which powers its PC products, and its stated ambition to provide customers with a “seamless mobility experience” this is no surprise.

Another new device in Acer’s lineup is the Aspire R11 convertible laptop that offers a display that folds completely back on itself, much like Lenovo’s Yoga laptop range. While we like the flexibility of convertibles we’ve found they’re often underpowered from a processing perspective. The R11 promises a choice of Intel’s Pentium or Celeron processors, which suggests its unlikely to buck the trend for lack-lustre performance in this market segment, but we’ll reserve judgment until review units actually land at Stuff Towers.

Acer’s also updated its Switch range of 2-in-1 devices, and now offers 10-, 11- and 12-inch models, each of which promise up to 12 hours of battery life (even two thirds of which would be adequate if, as is certainly the case, actual mileage varies), and include a redesigned hinge mechanism for attaching to the accompanying keyboard. 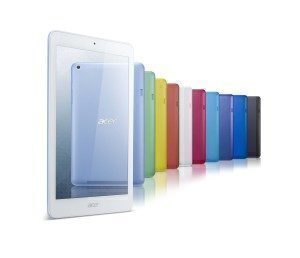 New Iconia tablets include the One 8 and Tab 10 (each with screen sizes corresponding to their names) that offer IPS displays for improved viewing angles, 5-megapixel rear cameras and Acer Precision Plus technology, which the company claims makes for more accurate touch input.

It’s no surprise that in the slew of new products wearables have reared their heads, too. Acer’s had a basic fitness band called the Leap since last year, but now appears to be trying harder to stake its claim on consumers’ wrists with two additions to the family.

The first, the Liquid Leap Fit, is an entry-level health-centric wristband, while the Liquid Leap Curve is aimed at the fashion conscious. Both devices include heart-rate and “stress” sensors, are waterproof, and have interchangeable straps, opening up a world of possibilities for third-parties. As expected, an accompanying app will tally your activity and present you with pretty, guilt-inducing (and hopefully action-encouraging) graphs. 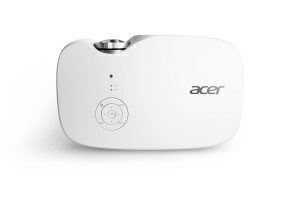 For the digital nomad, Acer’s offering a hyper-portable projector called the K138ST that has built-in speakers, onboard power and the capability to project a 100-inch image.

Perhaps the best looking device Acer revealed was the Predator Z35, a 35-inch curved monitor aimed at desktop gamers. To accompany it, the company is also releasing a new Predator desktop and a pair of 15-inch and 17-inch gaming laptops. The laptops includes programmable buttons and shortcuts, intensive cooling, a subwoofer and ports to make upgrades and expansion easy.

As a final addition to the Predator family Acer’s also bringing a dedicated gaming tablet to the market that includes four speakers and haptic feedback. The company wouldn’t speak to the screen specifications, but we’ll know later this year when it launches in the third quarter.