Acer’s in the smartphone game now, throwing their hat into an increasingly crowded ring. And any ring is bought to be crowded when there’s a huge amount of money floating around in it.

Acer’s been in the smartphone game for a while, in fact, but it’s only fairly recently that their smartphones have been getting more traction in local markets. And with more traction comes better phones like Acer’s Liquid Jade, a dual-SIM handset that emulates some of Samsung’s older handsets. And, then again, it doesn’t. 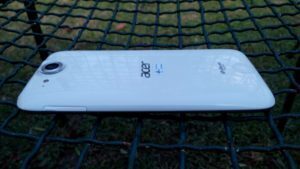 The Liquid Jade resembles, at a quick glance, Samsung’s range of handsets. The plastic range, not the shiny new glass and metal outings that the South Korean company has been known for. Acer’s mid-range handset looks a fair amount like the plastic Galaxy range but that’s mostly the rounded edges and the all-white colour scheme speaking.

Examine the phone from the sides or rear and you quickly note that this is all Acer. The Liquid Jade is slimmer and lighter than expected (110 grams, if you’re interested), with the non-removable rear panel sloping softly towards the metal edging that surrounds the 5-inch 720p screen. Everything, as far as ports go, is a part of the rear panel. The only possible exclusion is the charging port at the bottom of the phone, and even that is divided between the phone’s edges and the back panel. That’s how thin Acer have made this phone. Its 7.5mm profile has been beaten by other handsets but it’s still a nice surprise to see here.

The headphone port lives at the top of the phone opposite the slightly recessed power button – I’m not fond of that button, by the way, it’s in a finicky place when you want to unlock the phone. The volume rocker is on the upper right (shades of Samsung there as well) and the slot for two SIM cards (a standard and a micro) is on the left. Both SIM cards need to be inserted at the same time, which can get annoying if you’re a clumsy sort. Still, it’s a pretty good-looking phone. 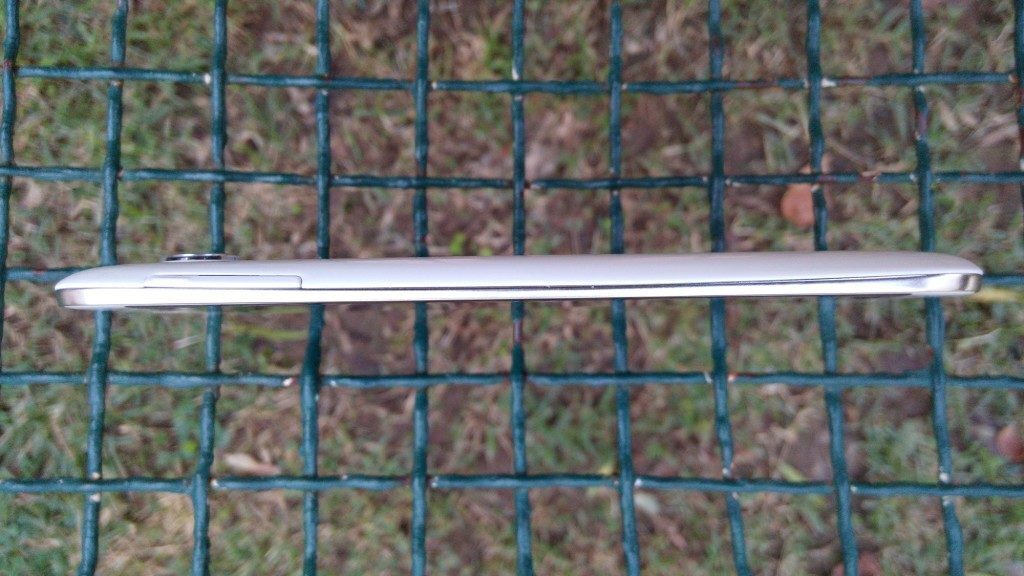 Looks aren’t everything though, as everyone always tells me. It’s what’s inside that counts and inside the Acer Liquid Jade is a MediaTek MT6582, a 1.3GHz quad core chip that is… decidedly average. In benchmarks, the Liquid Jade managed an overall 353 for single-core Geekbench performance and a 1167 for multi-core. Those numbers aren’t too bad, faster than the Moto G but slower than Samsung’s Galaxy S III.

So it’s mid-range, verging on on low if you’re making intensive use of the phone. In the real world, however… The Jade isn’t fond of multiple apps running at once on the Android 4.4.2 OS. At all. You’ll notice load lag as well as stuttering when switching between apps. Not what you want from a phone that will set you back about R5k in most stores. I’ve seen worse performance from a mid-range phone but I’ve also seen better. Acer still has some work to do here. Battery life could stand to be improved. There’s a battery saver mode included in the large collection of apps that are pre-installed on the Jade (many of which could be foregone) and you’re going to want to make use of that. Even then, expect to get about a day’s worth of use on a charge. A work day, not a just-before-you-go-to-bed day.

Acer’s dropped a few other things into the Jade to make up for its battery and power issues – it’s up to you whether they help. The phone speaker is a DTS affair – it’s good but won’t blow your hair back. They’ve also included a 13MP rear camera, which serves just fine in ideal conditions. It may have a high megapixel count but there are few other hardware features of note. The camera’s not going to like low-light conditions and even shade can make your images come out a little grainy. There’s an LED flash but it’s not a whole lot of help is these situations. But natural light? That’s another story.

Acer’s Liquid Jade isn’t a bad phone. They’ve gotten a few things right: Size, looks, weight and heft, and that 5-inch screen isn’t too bad for a 720p panel. But there are a few things that still need to be addressed: Power and battery life, the latter especially. The speakers and camera are steps in the right direction, the bloatware is a step away from it and it’s priced a bit high to make the negative aspects seem less irritating. In a market this crowded, Acer’s going to have to step it up a bit. But they’re headed there. I’ll see what pops up from them later down the line, they’ve got some interesting stuff in the works.