The Wii was great but this way a lot more folks will be able to experience the glory. Come on, how many times will I be able to use a line like that? To put it into context, Xenoblade Chronicles was a fantastic outing on Nintendo’s Wii but we suspect that not that enough folks wound up playing this fantastic JRPG. Because it was on the Wii and because it’s a JRPG. But they missed out so this second chance is a welcome one.

Another in a long list of remakes for newer consoles, Xenoblade Chronicles 3D is a port of the Wii version that first released back in 2010. As we’ve seen from Majora’s Mask, five years isn’t a long time to wait for a remake but it’s still held up well in the intervening time. Plus, it’s in 3D but odds are you won’t be playing it that way.

But you really should play it in 3D, at least until the headache makes you shut the feature off in self-defence. That’s because Xenoblade is home to large open areas where players will be spending their time exploring, fighting and competing quests. It’s a Japanese RPG, so if you’ve played any of the more recent Final Fantasy titles you’ve got some idea what to expect. It’s huge in terms of size, and the areas look great in 3D, and it’s also huge in terms of story and scale.

Because Xenoblade Chronicles is, at its core, the story of a sword. A special sword, of course, known as the Monado – a blade that is reputed to have been wielded by a being known as the Bionis, back when the world you’re playing in was first created. An epic battle against another being, called the Mechonis, ends with the two titans dying. Bionis forms the land you’re roaming and robotic enemies known as the Mechon have also been formed from the battle.

Of course, the robotic Mechon are nasty buggers and are bent on exterminating humans. The Monado is the only really effective weapon against these robotic invaders but it extracts a hefty price for its services. Players, as main character Shulk for the most part, are attempting to unlock its secrets and end the threat of the Mechon once and for all. You know, standard hero stuff. 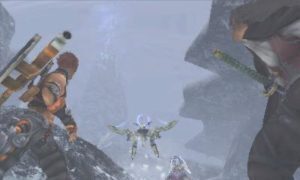 It’s a good thing that you can take Xenoblade Chronicles 3D with you now, as it calls for a commitment that a lot of gamers aren’t going to be able to honour. At least you’ve got a shot at it if the game’s sitting in your pocket. Quest options, side-quests and just wandering around the massive landscape and dodging high-level monsters will keep you busy for ages. If you’re the OCD type that insists on completing everything, then you’re probably going to top 100 hours of play and still not be finished.

There’s the option to backtrack (the aforementioned high-level enemies) but you don’t really have to if you’d prefer not to. But that’s no fun at all.

There’s a surprising depth to quests. Some will call for being at a specific location at a specific time in the day-night cycle. Indeed, there’s an effective quest journal system that will keep you posted on the many things that you need to do. It’ll also let you know about Affinities – basically, you can make friends with a lot of the NPCs that you come across – as well as track your achievements. Yeah, they’ve included those as well.

We’ve spent all this time going on about the story and the size of the world and all of those other JRPG-like things but little has been said about the actual gameplay. A large part of it is party and inventory management, where you’ll be kitting out your companions with the best possible weaponry and gear. You’ll spend more than a bit of time running around hub areas and talking to NPCs.

But combat is the highlight, where players will have to manually position their character to attack enemies, or mobs of them, while party members do their semi-automatic thing. There’s no pausing when attack cooldowns are ready either, you’ll have to make all of your choices on the fly. This could have fantastic results but if you’ve been neglecting your levelling or gear upgrades you’ll be stomped into the ground in short order.

It’s not enough to just hit enemies with your strongest attack either, you’ll have to account for your positioning (some attacks are more effective from behind or a flanked position) and the enemy type as well in order to make the most of the damage you’re handing out. The system takes some learning but you’ll be extremely happy that you put in the effort.

Xenoblade Chronicles 3D might be a Wii port but it’s a great one. The portable platform makes sure that you’re going to be able to enjoy this lengthy journey wherever you go. And that’s what it’s all about: immersing yourself in a vast and detailed world and going through the story the way that it should be experienced. If you happen to find enough time to head back to that one enemy right at the beginning of the game and show it what an ass-kicking actually looks like, all the better.