There are times you want to keep an eye on things at home or in some other location that you own/rent/happen to live in. The reasons… are generally important, from a legal standpoint, because you’re not allowed to set up a camera in a public bathroom or even your home bathroom. That’s an easy way to go to jail. But if you’re looking for a non-illegal way to remotely monitor an area, a wireless camera is definitely the way to go.

MSI’s SomeThings Panocam is an interesting option, because it looks like an industrial piece of kit. But, as far as actual usage goes, it’s all about keeping an eye on a room in your house. Where it’s a surveillance camera or as a baby monitor, or just a way to chat to the family on an overseas trip, we can’t really see the SomeThings cam being used anywhere outside the home. The reasoning for this is the metallic-feeling shell, the silvered tube design and the fact that it’s not going to be very pleased with any kind of weather whatsoever. The stubby little camera is fronted by a fish-eye lens, there’s a cap at the rear which conceals the microSD receptacle, a mounting screw as well as the power input. MSI have included a mount that can be screwed onto the wall or, more likely, the ceiling so that users can take full advantage of that lens (which I’ll get to in a moment).

The casing itself is somewhat fragile. Not around the circular section or even the front. I was goofing around with the MSI cam and working on my putt at the same time (see right) and found that the act of attaching a mount caused the plastic section at the back of the camera to flex. It’s not a problem if you’re planning on using the camera as a permanent fixture but it’s a design issue that could trouble users if you want to move it about often.

That fisheye lens is something and a half. While the SomeThings camera can be used horizonally – indeed MSI have a demo cam set up at their head office if you’re keen on downloading the app and testing out the smartphone functions minus a cam – it works best when mounted from the roof. The full 180-degree view (and I’d swear it could see behind itself as well) will encompass an entire room quite clearly, so if you want to see what your cats are up to… 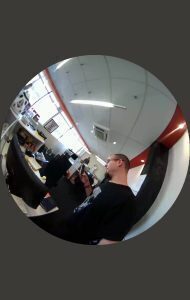 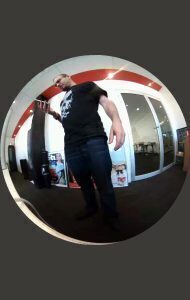 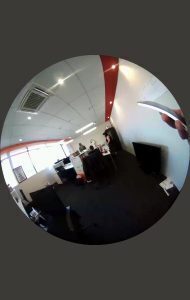 When connected to the app, which is a fairly simple process as long as you’re doing it (initially) somewhere there’s a wireless internet connection, you’ll be able to rotate the camera to any angle your heart desires. If there’s a zoom function I wasn’t able to locate it but you’ve got a full view of anything within range, which is awesome enough.

Two Cans And Some String

There are a few recording features, like time-lapse and snapshots, all of which are controlled through a smartphone. The Android version of the SomeThings app was used for this review and it’s a very simple-to-use bit of software. Unfortunately it’s also quite limited but that’s got more to do with the two-way audio functions than anything else.

The SomeThings cam will transmit audio through the camera, so you could use it as a baby monitor if you’ve got it sitting somewhere you can see your infant. Users are also able to transmit their own voice through the cam over a data connection, so you could also talk to your infant/cat if they’re in range. But there’s a problem – you’ll have to manually set the app to transmit and then disengage the setting to get audio from the camera once again. The concept walks with a push-button walkie-talkie but on a touchscreen app it’s less impressive.

Then there’s the camera lag. Since most of the testing here was done in-office, it was easy to see that there’s a delay of a few seconds for both video transmission and audio. It’s no deal-breaker but you’re not going to be interacting in real-time either. But remote connections are a dream, I was able to peek in on the office from 30km away before anyone had even thought to wake up for the day.

The MSI SomeThings Panocam would make for an easy-to-set-up home surveillance system, if you don’t mind putting holes in your ceiling. It’ll function equally well as a baby or general home monitor but there are a few faults to be aware of before opting for this stubby little remote camera. Just… don’t do anything naughty with it, okay?