Staring at, climbing into and driving the Audi TT makes one realise that cars, like commercial jets, will soon spend most of their time in motion under their own control, rather than ours. It’s just so incredibly smart. Get near enough to it with the card-like key and the doors unlock, hop in and Bluetooth connection and media player will pick up your podcast or steaming audio where you left off.

Once you’re buckled up, put the 6-speed S tronic gearbox into reverse and the music dips while the digital display where the dials should be turns into a camera view of what’s going on behind you. Press the “talk” button on the steering wheel and you can control media or call your mother and tell her you’re driving the new TT (not that we did that).

Modern high-end cars have turned into computers with four wheels and Audi’s decided to wholly embrace this with the 2015 version of its TT. Even the lights are smart, switching from bright to normal progressively from one side of the car to the other as you turn a corner with another vehicle oncoming, maximising visibility while refraining from blinding anyone.

The analogue instrument cluster has vanished entirely in favour of a 12.3in/31cm TFT display. Audi calls it the “Virtual Cockpit”, and the aeronautical reference isn’t lost on us. As you’d expect, put your foot down and the TT flies, even in its lowliest engine iteration (but more on that later). A Virtual Cockpit, it turns out, is far less dorky than it sounds. The display is more than a digital upgrade to the conventional speedo, rev counter and fuel gauge combination, it’s an adaptable and brilliant tool for telling you everything you need (or want) to know, right where you need it.

From mapping, to media to conventional information, the display can be used for everything and is controlled either via the buttons and rollers on each side of the steering wheel’s spokes, or via a four-way controller in the centre column where you’d expect the handbrake to be, if there was one (like the ignition, the handbrake has been replaced with a fighter-jet like button).

Frankly, putting the display behind the steering wheel makes far more sense than putting it in the middle of the dashboard. It also gives the dashboard a clean, minimalist look with its circular air vents and judicious, single row of buttons for things like selecting the drive mode, adjusting the rear spoiler and engaging the parking assist. Oh, did we mention the TT can park itself? Pull up to a parallel parking bay, press a button and all you have to do is brake while the steering wheel turns of its own volition and numerous cameras and sensors that run around the entire exterior of the car guide you in.

Audi seems at pains to shake off the criticisms the two previous generations of TT met with. One was that they were heavier on style than tarmac-eating substance, the other was the nature of their lines: too soft, too curvy, and too feminine. Add triangles galore for a more aggressive face and a ton of tech and you’ve got a toy aiming itself more blatantly at boys.

The new TT is pointier all over than its parent and grandparent. The windows – which drop ever so slightly when you touch the door handle and do the reverse when you close the door – meet the panelling at an obtuse angle that’s repeated, albeit mirrored, at the apex of the door panel’s curve. The same angles also face one another on the opposite edges of the grill.

In short, there are triangles all over the place. Because triangles mean play, and when you put two of them together, they mean fast-forward (sure, they can also mean rewind, but we don’t go trampling on your metaphors, do we?). The result is one good-looking hunk of steel, leather and aluminium trim.

Hot on the inside

The whole of the TT’s interior feels considered and deliberate. Each air vent has a central dial with an integrated display. Pressing a dial turns the vent on or off, turning it adjusts its setting, and twisting the outer ring that surrounds each vent directs airflow. Above the gear lever there’s a sizeable, covered compartment that slides smoothly and silently out of sight at a press to reveal USB and auxiliary jacks, with more than enough space for the phablet of your choice. 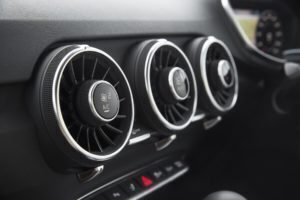 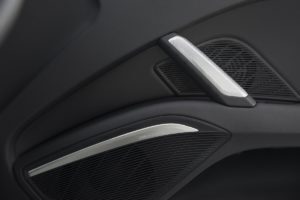 Meanwhile, an automatically tinting rear view mirror and blind-spot warning lights in each wing mirror add to the TT’s high-tech aesthetic. As do the warning sounds and on-screen notifications whenever the car gets too close to something or something gets too close to it. Even though it looks like it could, the Audi TT doesn’t drive itself… yet. But that’s good, because it means we still get to.

The Bang + Olufsen sound system doesn’t hurt either; the numerous speakers are hidden behind discreet grills with equally understated branding. We took great delight in baffling passing high-school-aged children by playing Beethoven’s fifth at obscenely high volume one morning en route to the office. In short, the TT looks and sounds as good on the inside as it does on the outside.

Looks aside, there’s also plenty of glee inducing driving to be had in the TT. The S model offers four drive modes: economy, dynamic, comfort, and individual (which lets you pick elements from the other three), but we found it most responsive when we shifted the gear level to manual and used the paddles on the steering wheel to push the revs higher than the automatic gearbox usually would in any mode.

The S tronic designation means there are essentially two gearboxes at work, one for the even-numbered gears and another for the odd, which equates to a delay of 0.2 seconds for a gear change and an almost imperceptible loss of power during that time. It’s so smooth that if it weren’t for the guttural sound the TT makes when you’re heavy with the foot and quick on the paddles, you’d swear it was still changing gears itself. Thanks to its diminutive height, weight and its all-wheel drive the TT hugs curves like a toddler hugs a teddy bear. There are front-wheel drive versions available, including the diesel-powered TDI, but we imagine those are even more fun to throw into corners, especially with the stability control turned off.

There’s no such thing as perfect…

As impressive at the Audi TT is, we have a few gripes. For a start, the two rear seats are utterly superfluous. There’s even a warning sticker on the edge of the boot when it’s open concerning the very real risk of hitting passengers’ heads with it. And looking at the sticker, they needn’t be tall passengers.

The only things you’re going to get in the TT’s backseats are children young enough that their feet don’t need to see the floor (let alone touch it), medium-sized dogs, groceries, weekend-away luggage or double amputees.

Boot space isn’t any more generous, but that’s to be expected after even the most cursory glance at the TT’s sweeping rear window. Thankfully, the backseats fold down, and we were tempted to just leave them    that way.

Also, adjusting the seats is a jarringly analogue and manual affair in such a technological wonder. There’s a winder for the angle of the backrest, a lever to move the seat forward and backwards and another one for adjusting its height. Further investigation revealed it is possible to get electronically controlled seats, but that adds another five figures to the price.

And, while the circular, four-way controller’s top supports touch, writing individual letters to enter addresses turned out to be far more effort than simply trying to speak the address in faintly German-accented English and leaving it to the voice recognition.

…but this is pretty close

Reasonably speaking there’s nothing not to like about the new TT. It’s comfortable, elegant, attention grabbing, responsive and oh so very pointy.