Samsung’s present lineup of tablets not complicated enough for you? Don’t fret: the Korean tech giant has revealed its latest contributions to the mid-range tab-war at a secretive press event in Russia.

The Galaxy Tab A (8in) and A Plus (9.7in) are likely to be placed around the €300 price-point (about R3,950), pitching them squarely between more expensive offerings from Google and Apple and the cheaper options out there.

With 24 tablets presently listed on the Samsung site, their current range is a maze of glass-fronted rounded-rectangles. So what can the A and A Plus bring to the table to set them apart?

Well, the headline stats aren’t all that striking – 1024 x 768 screen resolution, an as yet unknown 1.2GHz Cortex-A53 processor, 16GB of expandable storage space (up to 128GB via microSD), a 5MP rear camera and a 2MP front camera.

While far from terrible given the price, there’s not a lot to distinguish them from similar offerings in the current range.

Despite its fairly standard Samsung styling and mid-range pricing, the A series does look to have a couple of tricks up its sleeve.

Shaving more than a few milimetres off the thickness of similar tablets, the A and A Plus slide in at 7.5mm – that’s thinner than the Xperia T3 phablet, which Sony marketed as the “world’s slimmest” in its class. Not bad, particularly with Samsung having crammed in two loudspeakers on the 9.7in model (though reportedly these do not function in stereo).

Any concerns about bend and flex on such a thin tablet, particularly the 9.7in version, will have to wait until we get our hands on one…

The biggest selling points of the Tab A and A Plus are likely to be their 4:3 aspect ratio screens. Previously the domain of the iPad, 4:3 represents a step-change for Samsung, who have previously resolutely stuck to the 16:9 ratio on their tablets. 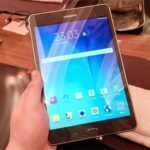 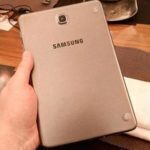 What this means is more comfortable web browsing, with pages displaying more naturally, while documents and eBooks will become things of beauty, with less time spent scrolling and more time reading.

Whether this will lead Samsung to pitch the A more heavily at the business market is uncertain, but with both the Nexus 9 and shiny new Nokia N1 similarly using 4:3 ratios, this new direction for tablets is an important one, not least because competitors will have to work even harder to distinguish themselves as valid alternatives to the iPad Mini.

Both iterations of the ‘A’ will also come with 4G connectivity, a feature not previously found on Galaxy Tabs at this price. Of course, the increased browsing speed which comes with 4G means nothing if the battery on the ‘A’ won’t last until the evening commute.

Thankfully, Samsung has squeezed in a more-than-generous 4200 mAh battery on the 8in variant (reported to last up to 10 hours), and a grand 6000 mAh juice-pack on the larger 9.7in A. This should mean plenty left in the tank for 4G surfing, cat videos and Facebook in your spare moments.

Like the Galaxy S6 smartphone, the A tabs will feature wireless charging, and, according to SamMobile, the pictures from the launch event show the new models running the latest version of TouchWiz (based on Android Lollipop), which Samsung reports is more optimised and less bloated than previously.

The A and A Plus are set to be released in Russia next month, although there’s as yet no word on when they might reach the rest of the world.