Until now, the ability to withdraw cash from an FNB ATM without using a card was limited to the bank’s cellphone banking service. That meant fiddling with USSD codes – a great option if you have a feature phone but irksome if you’ve got a smartphone running the FNB app. With the feature now available in the latest version of the app, leaving your wallet at home or losing your card just got a whole lot less annoying.

The cardless withdrawal facility is available in the recently updated apps for Android, Apple, BlackBerry and Windows Phone devices and appears on the app’s landing page. Users are prompted to enter their online banking password and can then select how much cash they’d like to withdraw, up to their daily withdrawal limit.

Users then receive a temporary ATM PIN on screen and via SMS that can be used at any FNB ATM to make the withdrawal within 30 minutes. The PIN can only be used once, and if it isn’t used within the 30 minutes a user will have to perform the process again to make a withdrawal. 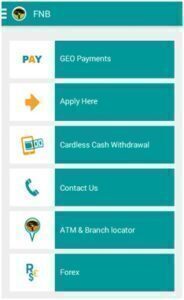 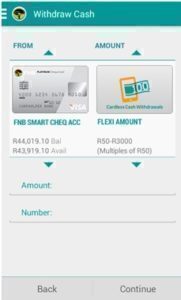 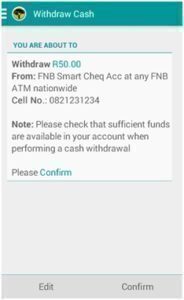 FNB says there are 1.2 million mobile devices that regularly make use of its mobile banking apps and that more than R2 billion has been withdrawn using the cardless cash withdrawal service on cellphone banking. Which is a longwinded way of saying that bringing the feature to its mobile app is probably long overdue.

If you’ve lost and cancelled your cheque card you can use the cashless withdrawal facility while you wait for your new card, but the same doesn’t apply to credit cards – cancel that and you won’t be able to withdraw from that account until you receive your new card. But then, you probably shouldn’t be drawing cash on a credit card anyway given the hefty fees that usually incurs.