Confession time. But first, here’s what you need to know. The Legend of Zelda: Majora’s Mask is one of the most critically acclaimed games in a series from Nintendo that spans decades. The protagonist, Link, is one of the most recognisable game characters around (but he’s no Mario). And… this is the first time that I’ve played any of the Zelda outings.

Besides being a shameful admission from a gamer, this also means that I’ve got no background on this remake, nor any idea how it was supposed to work. So the time-limit and constant rewinds of gameplay to the starting point came as a bit of a shock – almost as shocking as the complication underlying this whole simple-seeming adventure.

Being unfamiliar with the rest of the series (and you need an encyclopedia to really know what’s going on there), all I can tell you is what happens at the start. Series hero Link, riding his horse through a forest, is set upon by two fairies and a character known as the Skull Kid. The Skull Kid makes off with most of Link’s stuff, turns our hero into a Deku Scrub (who looks a lot like the Plants vs. Zombies pea-shooter) and then runs off. As it turns out, Skull Kid is wearing Majora’s Mask and Link, in his altered state (or states, as is the case later) is tasked with getting it back.

The consequences of failure are extreme. As in global extinction extreme. The moon is falling, thanks to the Skull Kid’s antics, and you as Link have three days to get Majora’s Mask back and save the world.

Trust Me, I’m A Mechanic

This plot line sets up one of the more interesting – and perhaps frustrating – game mechanics I’ve ever come across. The three days will pass, in-game, in a little under an hour. That’s not a whole lot of time on the surface but you’ve also got all the time in the world to accomplish your aims. Confused? Good.

You’ve got an hour. If you’ve never played Majora’s Mask before, that might get you through the first quest section, provided you’re following the instructions and hints given to you by your fairy assistant, Tatl, and avoiding all of the sights and distractions in the Clock Town hub area. But you’re not going to make it all the way through the game in that span of time. 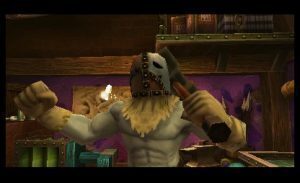 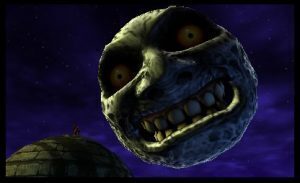 So… the world will end. But you and Link won’t. Instead, time will be reset and Link will be placed back at the beginning of the three-day/one hour cycle. But you and he will both be wiser than you were before. Later, players will gain the ability to mess with time to some extent but it mostly has the same effect – a return to the beginning, with all of your items lost except for an exceptional few. And some of your progress will be saved, in a way.

Sadly many players who aren’t long-time fans will upset by this gameplay mechanic, particularly as Majora’s Mask seems to plod on in the early stages of play. Often it will seem that you’re just retracing ground but there are ways to make headway. Players will open up access to new areas when they have cleared the outer areas like Great Bay and that access will remain open, allowing you to continue on your quest even though you’ve been sent to the starting point once more. Players must often opt to head back to square one using Link’s ocarina, in order to retain their progress (as much as is possible), as well as move time forward or slow it down. The last ability comes in handy when that little countdown clock starts ticking and your current goal is in sight.

But it all works. Player may opt to reset time just to experience an entire side quest before heading back to square one for another crack at the main mission. There’s a lot to see, if you have the patience to properly explore the time system governing Majora’s Mask 3D. Quite aside from the headlining story, there’s a lot to see, hear and a lot of other stories to explore. Many of these are charming, in their own way, while others are frequently sad and even extremely dark (as is most of the game – don’t believe everything that a visual style tells you about a game, folks). And having the ability to rewind time with more information than you had before will let you chip away at these stories until they reveal their secrets.

Masks, as the title implies, play a huge role in this outing for Link. You won’t be able to leave the Clock Town area to the larger outer locations without one of the masks that transforms you from a Deku Scrub into… something else. The Goron and Zora masks have their functions as well, allowing you to perform actions that aren’t possible as Link or the Deku. As a Deku you can float around, the Zora mask lets you swim and the Goron mask makes Link a lot more powerful. There are others to discover and use, each of which with their own perks and side effects.

For a remake, The Legend of Zelda: Majora’s Mask is as charming as I’d imagine it was back when it was first released on the N64. The fact that now, almost fifteen years later, Link’s timed adventure is an attractive proposition on the Nintendo 3DS is a remarkable achievement in itself. I can’t speak for the changes that were made from the original and I can understand the almost inevitable player frustration for newcomers but I also have to say: perseverance will show that Majora’s Mask is a rewarding experience, no matter how many times you have to return to start.