Ever get back from the store to find some terrible driver has left an unsightly dent in your door? Not what we’d call fun.

Thankfully, German manufacturer Hella has invented a technology called an Intelligent Damage Detection System, that will alert you when the impact occurs and how intensive it is. Potentially from a scale of ‘minor dink’ to ‘Hulk Smash’. 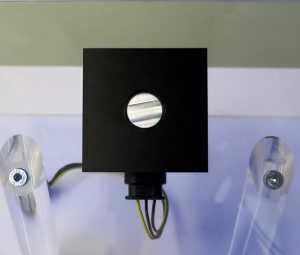 The system uses sensors that can be glued behind door panels or attached onto existing parking sensors. Marc Rosenmayr, a Hella board member, says the system can function with a minimum of four sensors, and uses 12 in total. The more sensors, the more information is available for drivers to view. The system also works with a number of materials: aluminium, steel, thermoplastic, fibreglass and carbon fibre.

If a car has onboard GPS, Hella’s system will be able to tell the driver when a dent, scratch or impact happened, and where. Examples include being able to tell if a valet scraped the rear bumper while reversing, or if your teenage son or daughter opened the driver’s door straight into another parked car or wall. Eek.

Hella sees car rental companies as being potential customers, potentially making the returning process a lot less stressful. Instead of having to go through a vehicle check when you return a rented vehicle, the company would already have a record of any damage on the car.

“If there was no damage, then you literally just drop the car off and you don’t have to speak with anyone. They email you the final invoice. If there was damage, then someone will come to assist you”, says Rosenmayr.

With regards to personal vehicles, a compatible app could let the you know when an accident occurred, giving you the chance to catch whoever caused the damage.

It may be some time before we see the technology on the roads though. BMW is the only named brand that has expressed an interest so far, and Hella expects to see its system be installed in cars from 2018. If you’re particularly clumsy then, you’re safe for now. Though you should still leave a note.