If you have a longing for the days when the netbook was everywhere but still don’t want to give up your tablet portability, then Acer might have the device for you. We’ve played with a few of Acer’s hybrid products, including one with a massively sturdy hinge, but this is one of their better efforts. We’re referring, of course, to the Acer Aspire Switch 10 and its magnetic personality.

The Aspire Switch 10 gets its name from the various ways that the hefty tablet, which acts as a display when you’re using this Acer as a netbook, can be manipulated so you’re either tenting it, using it as a display unit or as a conventional computer. There’s also the tablet form, if you need another transformation from your hardware.

The Switch 10 is pretty bulky, especially when you add in the included keyboard dock, bringing to mind the first wave of netbooks before they got them to slim down a little. The tablet section is also fairly thick through the middle, especially compared to some of the tablet hardware we’ve seen of late from other manufacturers.

The dock and display fit together with the aid of magnets with a pretty strong magnetic force at their command. The two portions won’t slip apart during normal use and it takes a firm tug to separate them. Bringing the screen near the docking area on the keyboard will see a noticeable pull slapping the two sides together – great when the docking slots are lined up, not so much when they’re not.

Overall construction is very brushed-metal-ish, though neither the tablet backplate nor the keyboard, which is a decent example of an Acer chiclet-style interface, contain much metallic material at all. The only full-sized USB port is found on the keyboard, every other option (audio, mini HDMI, mini USB and a microSD card reader) are found down the side of the tablet portion. 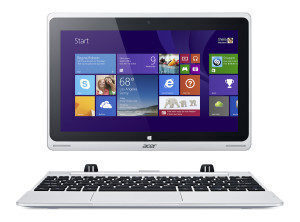 The 10.1-inch Switch 10 uses one of Intel’s Bay Trail Atom chips, the Z3735F. It’s speedy enough, though this 1.33GHz bit of silicon is typically used to run Android-based tablets so you can expect a bit of lag with more intensive operations. There’s an onboard graphics section to this SoC, meaning that video content will be just peachy but you’ll have to curb any gaming ambitions you might have for the Switch 10. That’s not going to happen. It’s a hybrid, not a supercar.

It’ll do most of your office-related tasks without a hitch, making the Aspire Switch 10 capable in the departments where it should be: casual media consumption and minor office dogsbody. If you’re looking for functions of a more impressive nature than Windows 8.1 apps, some Office tootling about and maybe a movie or two, you’ll have to scale it up a bit.

You’ll be able to connect wirelessly to everything though, there’s Bluetooth and 802.11 a/b/g/n support bundled in. The webcam is more of an afterthought but useful if you like to Skype in unusual places.

Odds are that if you’re in the market for a netbook/tablet hybrid, you’re not expecting it to be able to make coffee while loading Photoshop. That said, there are a couple of negative points to look out for. The display, which hosts the bulk of the hardware, makes the whole thing top-heavy when using it in netbook mode. Then there’s the proprietary charging connector from Acer – why they didn’t just stick with a tablet-standard microUSB is beyond us. The build quality might also be a concern, as is the weight. It clocks in at around 1.1kg for the whole thing (dock included). It’s not massive but heavier than a tablet should be.

We’ve seen worse hybrid machines and Acer have gone for an unusual docking option here – one that works, mind you. It’ll suit a casual user, especially one who is looking for the mobility of a tablet with the occasional keyboard-based task. It could be better engineered and battery life is also a consideration but the Switch 10 is not bad, for all that.