You are at:Home»News»Garmin snaps up local start-up iKubu for its Backtracker radar tech

US-based navigation equipment business Garmin has acquired South African start-up iKubu for an undisclosed sum. iKubu, which has offices in Stellenbosch, first came to prominence early last year when it attempted to crowdfund a product called Backtracker, a radar device intended to alert cyclists to the speed and distance of vehicles behind them and warn them should a vehicle get too close. 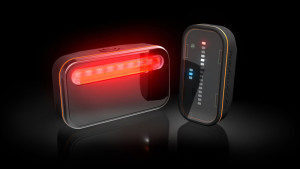 iKubu sought to raise a little shy of $195 000 to put the Backtracker into production using crowdfunding platform DragonInnovation, but fell short of that, raising $127 400 by the time the campaign closed in September last year.

Backtracker consists of two devices – a low-energy radar placed on the saddle post facing backwards and a set of LEDs that sit on the handlebars and provide a visual representation of the data from the radar.

“iKubu has found a way to implement short-range radar into a low-power system that addresses a common concern among cyclists – identifying potential hazards that are approaching them from behind,” says Cliff Pemble, Garmin’s president and CEO in a press release on the acquisition. “We are delighted to add this technology to the Garmin portfolio.”

“Garmin is a technological leader among cyclists, and we are looking forward to integrating our technology and expertise into their outstanding products,” says Franz Struwig, iKubu MD. “Garmin gives us the resources to develop, bring to market, and showcase our products that we otherwise would not have.”

Most of iKubu’s employees will become employees of Garmin’s existing South African subsidiary and will “continue to operate primarily as a research and development centre based in Stellenbosch,” the statement adds.