British comedian Eddie Izzard has pointed out that the skipping rope is an unusual tool, being shared mostly between little girls and “big, f***-off boxers”. And, of course, anyone else who wants to get a punishing cardio workout in a confined space with a bit of head-room. But it’s past due for a tech update and that’s what Sophia, an ensmartening of the skipping rope, hopes to provide. 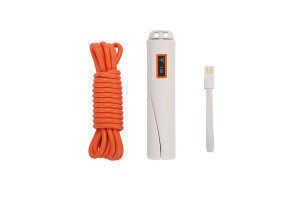 Designed and developed between Cork in Ireland and Shenzhen in China, Sophia draws its name from an old Irish painting. But the tech that the team behind this smart jump-rope has included is anything but old. It’ll track your hops, skips and jumps, as well as tell you how many calories were murdered in your latest session via a display built into the handle. Sophia features a one-month battery life and will sync with mobile devices over a Bluetooth connection. Because everything’s better with Bluetooth.

Android and iOS apps are in the works, with Apple’s Health and Google’s GoogleFit being particularly supported. Aside from that, what we’ve seen from the build quality of the rope itself, it should endure more than a few sessions at the tougher gyms. You know, where large, well muscled boxers skip until they’re ready to punch everything.

For a slight preview of what Sophia will have to offer, head on out to their homepage. The Kickstarter campaign is set to kick off later next week, so we’ll provide an update on the status of this smart skipping rope then.