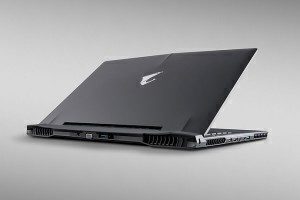 Who ever said bigger is better? The guys at Aorus obviously ignored this saying and managed to cram a high caliber of gaming tech into a tiny portable laptop. Again. The announced-at-CES-2015 X5 boasts a UHD IGZO (indium gallium zinc oxide) display and flaunts its ultra-high resolution on a 15.6-inch screen. It also weighs in at about 2.5kg, so you won’t need a forklift if you are planning on travelling.

When we get our hands on this tiny monster, we will get to experience the ‘ultra-sleek’ design the X5 has. It seems the days of gaming on a desktop may be numbered, for those brave (and moneyed) enough to embark on this laptop-gaming journey. Aorus has managed to squeeze pair of GTX 965M graphics cards into the 15.6-inch chassis which render up to a claimed P12000 in 3DMark 11. This promises extremely smooth gameplay, even on the highest of settings, for those who enjoy ‘aesthetically pleasing’ gaming.

Looking at these specs everything seems insanely impressive for the gaming community at large but we have to hope that the 4K display in the X5 performs better than the X3 Plus did. They seem to have pumped up the power for the X5, though, so it should be okay.

Aorus also released an updated version of the X3 Plus which is said to be the world’s lightest gaming laptop, weighing a mere 1.87kg. What’s new? The GTX 970M from Nvidia. The new X7 Pro joins the Aorus group of gaming gadgets, perhaps justifying Aorus’ claim of being “the world’s most powerful gaming laptop” with a fresh set of dual GTX 970M GPUs inside for 2015.