Every year, CES throws up a gadget that no-one had thought of before – sometimes because of a paucity of imagination, sometimes for reasons of sanity. 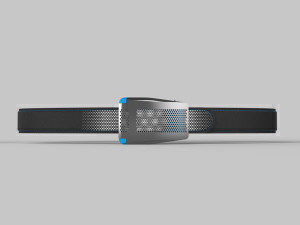 This year’s highlight is undoubtedly the Belty – a smart belt that can tighten and loosen itself according to the needs of your waistline. Pig out at lunch, and it’ll slacken off to give you some breathing room; stand up, and it’ll tighten up to stop your trousers falling down.

We went hands-on with the device (well, waist-on); it’s currently a rather chunky protoype that makes an audible whirr as it tightens up, but we’re assured that Belty will be shedding some weight itself before it makes its way to store shelves; expect the buckle to be half as thick as the pre-production version, and narrower too. Though here at Stuff we think they should just stick a big eagle or a shield on it.

Is it necessary? Well, it certainly stops you having to endure the social embarrassment of fumbling about for your belt buckle to loosen it a precious notch or two. Belty monitors your girth, too, alerting you if you’re piling on the kilos and encouraging you to exercise. With its array of accelerometers and gyroscopes, it’s also yet another device that can act as a step tracker.

Yes, there are plenty who’ll snigger at the idea of “adding to the belt experience” – but they’re probably the same sort of people who scoffed at the idea of putting computer chips in vacuum cleaners and washing machines; as wearable technology matures, we can expect to see more and more articles of clothing packing smart features. Roll on the smart underpants.