Where is your third space? Is it the little coffee shop you sneak to in order to catch up on some emails over a cappuccino?

Or perhaps it’s the garden shed, where you escape life’s many miseries over some power tools and a beer or two. Er… not in too close proximity, obviously.

Whatever it may be, Mercedes believes that in the future its fully autonomous luxury machines will be the ultimate third space – a place where captains of industry can hold meetings, plan takeovers and forecast profits while effortlessly cruising to the next important destination. 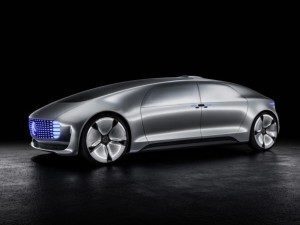 The F 015 Luxury in Motion, to give it its full title, was unveiled at this year’s CES with a rather impassioned speech from Dr Dieter Zetsche, head of Mercedes-Benz cars, who said the car “is growing beyond its role as a mere means of transport and will ultimately become a mobile living space”.

That’s why the cocoon-like self-driving sculpture hosts the ultimate interior, which is large enough to comfortably seat four in individual swivel chairs. The occupants enter the vehicle via rear-hinged doors that open to 90-degrees and then face each other in a move that Merc hopes will bring back the social interaction experienced by our distant relatives in the time of horse and carriages.

Once inside, passengers can then choose to take over the driving duties or breeze to their destination autonomously. Also, any occupant can take control of the vehicle at any time when it is autonomous mode thanks to a floating control console.

Because the annoying process of driving a car is taken care of, the interior is caked in cutting-edge tech that allows those travelling inside to interact with the vehicle on a number of levels. Every door panel features a large screen that is operated by eye-tracking technology and gesture controls.

Prod one of the interactive doors and it can display a video feed from the outside world, access smartphone data and applications, as well as pull up detailed information about the destination and surrounding landmarks from the web. 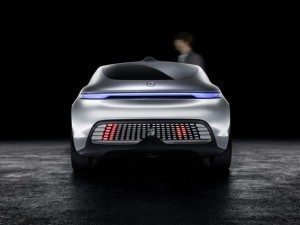 There are also HUD units on the windscreen that reveal specific driving information, a main driver display in the dashboard and a screen in-between the rear seats, which is positioned at head height to mimic a rear window.

The vehicle is also considerate to those in the outside world and other road users, as the “Extended Sense” sensor system constantly monitors its environment in a 360-degree radius.

Swanky LED displays at the front and rear of the car also warn others of potential obstacles.

For example, if a pedestrian crosses the road in front of the car, LED lamps at the rear will track his or her movements and flash up a light display to warn following vehicles not to overtake.

Perhaps the F 015’s coolest party trick is its ability to project a zebra crossing on to the road ahead of it using laser technology, signalling to pedestrians that it is safe to cross and even audibly greeting them over a built-in loudspeaker.

It’s all a little bit out-there for now (even the rear of the F 015 features a QR code for others to retrieve information on the car in front) but Mercedes is fully-committed to the idea of the autonomous driving.

We may not be seeing the F 015 in it current form on the road any time soon but don’t be surprised if something slightly less Minority Report turns up at your local dealership by 2030.