Last year high-quality audio became a hot topic again thanks to musician Neil Young’s Pono, an iPod-esque music player for audiophiles. Now Sony has entered the race, too, with its Walkman ZX2. The company is showing off the device at CES in Las Vegas this week and its expected to cost around $1 100 (around R12 000) when it goes on sale later this week.

The ZX2 is powered by Google’s Android operating system (albeit the older 4.2 Jelly Bean version) and includes 128GB of storage and an SD card slot for adding even more should you so wish. Given the ZX2 is intended for lossless or other uncompressed audio files, that 128GB could fill up pretty fast. 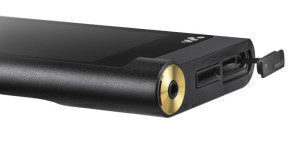 As you’d expect, the new Walkman supports all major high-quality audio formats, including AIFF, Apple Lossless, DSD and FLAC. And what 21st century piece of hardware would be complete without support for Bluetooth and NFC?

But what’s the fuss about these filetypes? What happened to good old MP3s? In the same way a 720p video file is less detailed than a full HD one, MP3s compress audio and throw out some of the finer details in the process. MP3s might be good enough for those of us who just want to be able to store tons of music on our phones, but audiophiles will tell you that high-quality audio files sound richer, fuller and more accurately replicate the sound captured in studio at the time of recording.

If that sort of thing matters to you the new Walkman may be exactly what you’ve been waiting for, but its hefty price tag is only the start: high-quality sound doesn’t come cheap. In addition you’ll need a set of top-notch headphones and suitably high-quality audio files to actually play on the thing, which could mean buying your music again in a lossless format or re-ripping your CD collection at a suitable bitrate.

The original cassette-tape-playing Walkman was a design classic and category defining device. The ZX2 may share the Walkman name but, given its niche target market, don’t expect it to achieve the same sort of uptake.