Here’s a name that we haven’t heard in a while. Polaroid are still out and about and they’ve got a trio of new gadgets headed our way. The set of kit that they’ve got on the way is currently being shown at CES, with some of it being available immediately if you happen to be State-side. 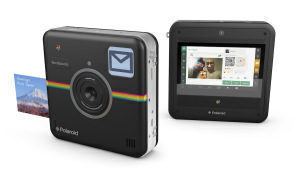 Their Socialmatic instant camera, which bears a striking resemblance to the Instagram logo (unsurprisingly) if you get the right colour scheme, is one of these. This little retro shooter boasts a 14MP front sensor and a 2MP rear camera, because of course it does. Once you’ve gone and captured something on ‘film’, it can be edited on the 4.5-inch touchscreen display and the rear and then either uploaded to social media platforms like Facebook, Twitter or Instagram – the Socialmatic is WiFi capable – or you can store it for later use to an SD or the camera’s internal memory.

If you are looking to go old-school, it can also be printed right from the device. The Socialmatic camera uses Polariod’s ZINK inkless printing system but that will require loading the camera with their proprietary ZINK Paper which uses “an advanced composite material embedded with cyan, yellow and magenta dye crystals and with a protective polymer overcoat” that is heat-activated. A bit like a supermarket printer but in full colour and, likely, expensive. The company also has a line of dashboard cameras coming in 2015. They haven’t gone into specifics about the different models just yet but there are a few of them and they seem to tick all of the boxes.

1080p video, a G-sensor that starts recording in the event of an impact, embedded GPS and windshield mounts will be present, as will the in-car charging standard. Pretty typical of dashcams. Loop and engine-start recording are also features that we’ve seen but Polaroid are bringing speed limit warnings from the camera as well as a lane wandering warning to some models. 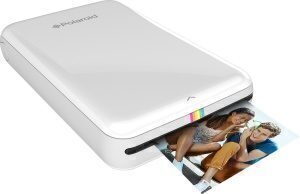 Lastly there is the portable photo printer, known as the Polaroid Zip. Think of this little Bluetooth/NFC-enabled printer (yes, it’ll pair with Android and iOS phones) as an offshoot of the Socialmatic camera – it uses the same proprietary inkless tech as well as those 3 x 2-inch Zink Paper consumables.

The printer itself isn’t much larger than the ‘film’ it takes, measuring 2.91 x 4.72-inches. That’s not a whole lot bigger than the average smartphone but the main aspect is the app that comes along with the Zip, which allows for a wide range of edits including filters, collages and just doodling on your snapshots before sending them to the pocket-sized printer.

All of Polaroid’s new bits and pieces have been priced and dated for the States. The Socialmatic cam is available now from Amazon and Photojojo for $300 (R3,530), while the dashcams (which start at $60/R710) and the Zip printer ($130/R1,530) will be available before the middle of 2015. We’ll keep you posted on actual local pricing and availability.