We might worry a bit about how thin smartphones are getting, but since you probably won’t try to cram Sony’s new 75in 4K TV in your pocket, we’ll issue some “oohs” and “ahhs” at its remarkably svelte design.

It really is a wonder of modern engineering. Sony’s new XBR X900C (55in and 65in) and X910C (75in) Bravia 4K Ultra HD TV models feature an ultra-thin “floating” style that is just 4.9mm at its thinnest, and the nearly-frameless shape can be mounted right up against the wall. 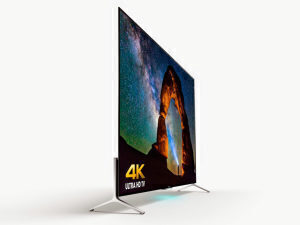 On top of that, Sony’s latest 4K Bravia models come with some other enhancements. On the hardware side, the 3,840 x 2,160 displays are backed by the new 4K Processor X1, which Sony says allows for improved color, clarity, and contrast while also enhancing 4K content streams.

And the software enhancements are notable, as well, thanks to the addition of the Android TV operating system to Sony’s 2015 line of Bravia 4K sets, with voice search via the included remote. Moreover, you can access PlayStation Now to stream full PlayStation 3 games over the cloud – without a game console in sight. All you need is a controller. And a decent internet connection.

Sony announced a few more 4K sets, which don’t seem to be as thin as the X900C/X910C, but have their own intriguing perks. For example, the XBR-X930C (65in) and X940C (75in) support Hi-Res Audio and feature front-facing speakers to show it off.

All of the sets will be available later this year, although no pricing details were announced. Let’s just assume “expensive” for the higher-end models and hopefully “well worth it.”