Lenovo’s X1 Carbon is a brilliant machine, often being the only Windows-sporting notebook to actually give the MacBook Air a run for Stuff‘s money. And the race is going to be repeated again in 2015, as the Chinese manufacturer has re-re-refreshed the ThinkPad X1 Carbon again for 2015. 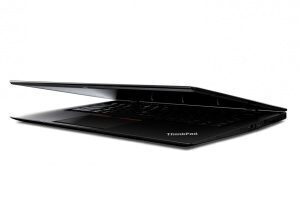 And the refresh takes things back a step. 2014’s Carbon featured a clickable trackpad and that upper adaptive row of keys but those weren’t all that useful by the look of things. How do we know (besides having actually used the Carbon)? Well, the 2015 edition is set to dispose of those bits.

It wouldn’t be very nice of them to take pieces out without putting something back though, now would it? And Lenovo are putting in a selection of Broadwell chips from Intel, with your price heading upwards as you select the speedier silicon. The 14-inch display will come standard at 1080p but there’s a 1440p upgrade that you can pick as an optional extra.

LTE will be available in some models in certain regions, though we don’t yet have a list of which locations are getting the connectivity add-on, and whatever you pick for the X1 Carbon’s innards, it’s going to measure 17.7mm through the middle. With this sort of thickness (or lack thereof) you’d expect it to be lightweight and the Carbon is also set to impress there. Fully-loaded, it’ll clock in at around 1.3kg.

Lenovo’s ThinkPad X1 Carbon will be landing in the States this month, starting at $1,250 (R14,600) for the base model. We’re expecting more than double that for a version with all the bells and whistles when it launches in SA. When will that happen? We’ll keep you posted.