We’ve kept our peepers on the sale of old Apple-1 computers for some time, as they are fetching some fairly ridiculous prices of late. Another one has gone under the hammer and, despite being a working unit that was sold by late Apple CEO Steve Jobs himself back in 1976 (seriously, they had proof), it managed to fetch less than the record-setting bid from 2013 for a different unit. 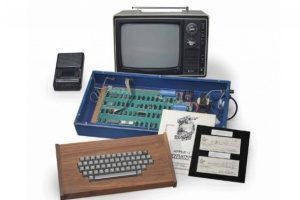 This particular Apple-1 went for $365,000 or, in South African moneys, R4.23 million. That’s still way under the record paid for an Apple-1 at auction, that all-time high comes in at $905,000. The sold-by-Jobs computer, with its massive 4k (kilobyte) memory and less functionality that the average coffee machine, was expected to fetch somewhere between $400,000 and $600,000 at the recent Christies auction held in New York.

The sale price of over R4 million is still a crazy amount of cash by anyone’s standards. Part of it is a rarity thing, there were only around 200 Apple-1 computers made and of those around 50 are thought to still exist in some way, shape or form.

It might be time (yet again) to go digging through that box of discarded tech to see if there’s anything in there worth putting on the block. Since the Apple-1 sold for around R7,000 back in the day, that’d be a substantial return on investment – even if it’s not in working order.