Lenovo’s latest flagship, contortionist laptop (the company favours the term “convertible”) radiates class – assuming you don’t get it in orange, that is. From its watchstrap-like hinge, which enables the display to fold completely flat against its underside (creating a beautiful – but bulky – 13-inch tablet) to its 3200×1600 pixel display and slim profile, the Yoga 3 Pro veritably screams: “I’m expensive!” 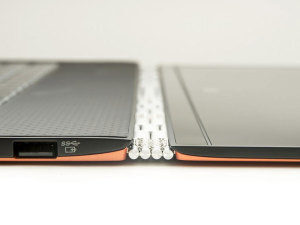 The Chinese hardware manufacturer makes two really excellent lines of laptops. The one is the powerhouse workhorse, the ThinkPad. The other is its Yoga range of convertible or hybrid laptops. The Yoga 3 Pro, the new flagship in the latter category continues where its predecessor left off in terms of raising the proverbial bar, but it’s not without its kinks.

It’s also not without competition. In one of its ad campaigns Lenovo takes a swipe at the comparative rigidity of Apple’s MacBook Air, but the original ultra-portable nonetheless remains a rival. Then there’s Microsoft’s Surface Pro 3 that offers similar levels of flexibility with a more potent processor.

Yogi-like flexibility aside, the QHD display on the Yoga 3 Pro is a thing of beauty. It’s incredible resolution and excellent viewing angles and contrast are fitting for a high-end (and high-priced) device, but while its touch support is welcome the actual integration is far from perfect.

The display doesn’t always respond to the first touch and changing orientations results in noticeable lag, which is problematic given how much the device relies on touch. That said we loved the range of on-screen keyboard layouts on offer, including a split keyboard for easy thumb typing when the Yoga 3 Pro is in tablet mode.

Another annoyance is the Windows button in the middle of the bottom bezel of the display. Either it should be capacitive and serve as a Start/home button, or it shouldn’t be there at all.

The Yoga 3 Pro’s good looks are impossible to deny, but this design finesse doesn’t always carry over in actual use. For example, the power button is on the right edge of the device and isn’t a slider or other difficult-to-accidentally-push design – a poor decision on a device you’re meant to be able to hold any which way. In addition to regular Laptop mode the Yoga 3 Pro offers Stand mode (where the keyboard is folded back beneath the display), Tent mode (like stand mode but with the device flipped upside down and stood up like an inverted letter V) and the self-explanatory Tablet mode (where the display is folded completely flat).

While Stand and Tent modes are useful, especially for watching video, tablet mode is less so because with its 13-inch display the Yoga 3 Pro makes for an enormous and unwieldy tablet. Also, every mode apart from Laptop relies wholly on the touch interface, which as mentioned isn’t perfect.

Then there’s the peculiar trackpad. Though it looks like one piece, there are two clickable buttons marked out at the bottom of the trackpad and the middle, horizontal third of it can also be clicked. It’s a mystery why the top third can’t be clicked. Thankfully it supports tap-to-click functionality, but it’s still a strange design call.

The keyboard, meanwhile, is excellent. It’s Chiclet-style keys require only the lightest of touches, are almost silent and are illuminated. The entire keyboard is slightly recessed so that it’s flush with the chassis and it deactivates in all modes other than laptop.

One of the more inspired design choices is the fact that the power port doubles as a third USB port when the laptop is unplugged. 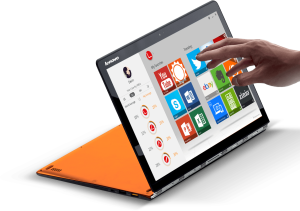 While Apple’s MacBook Air and the Surface Pro 3 are powered by Intel’s Core i5 processors the Yoga 3 Pro makes do with the more energy-efficient but less-potent Core M Processor. On the plus side that means silent operation because there are no fans in the laptop, but this stealth comes at the cost of performance.

Despite our review unit boasting a 256GB SSD and 8GB of RAM, changing the Yoga 3 Pro’s orientation more often than not resulted in lag. On opening too many programs or even too many browser tabs the same thing happened. That’s not to say the Yoga 3 Pro isn’t potent when compared to entry- or mid-level laptops, but it’s not nearly as powerful as you’d expect from a flagship device.

Supposedly the Yoga 3 Pro supports gesture controls for video via its built-in webcam, but after trying to get them to work for half an hour we gave up.

Though Lenovo claims upwards of seven hours of battery life for the Yoga 3 Pro we managed between four and five hours when connected to Wi-Fi, listening to music and with the display at around two-thirds brightness. That’s not awful, but it’s also not amazing, particularly when compared to the Surface Pro 3 or MacBook Air.

Windows 8 is designed with touch devices in mind, but even on a touch-enabled device like the Yoga 3 Pro it’s not great. That’s not the Yoga’s fault it’s Microsoft’s. Hopefully Windows 10 will deal with some of the problems of Windows 8, like the lack of continuity between the traditional desktop and the tile-based one. Then there’s Lenovo’s additions to Windows, like the settings menu that allows you to customise setting for each of the laptop’s four modes. While this includes interesting information about how you and other Yoga 3 Pro users make use of the device, we’d like to see more settings on offer, like the ability to turn off Wi-Fi when in tent mode or similar.

Also, given the Yoga 3 Pro’s tablet ambitions and target market of creative, the inclusion of a generic stylus would’ve been welcome for those who want to draw or jot down handwritten notes.

Flexibility is the Yoga 3 Pro’s biggest selling point. It’s amazingly adaptable and a great device for the sort of user for whom their laptop is an all-in-one workhorse, plaything and entertainment centre. And while we’d like a more potent processor beneath the hood it’s no slouch.

Perhaps the biggest problem with the Yoga 3 Pro is its price. Depending on the hard drive and RAM configuration you opt for you can expect to pay anything between R20 000 and R30 000 for one. Make no mistake, it’s a top-end device, but that’s a lot of cash to put down for a flexible display, and for that price it simply doesn’t feel responsive enough.

The Yoga 3 Pro looks great, feels great and for the most part performs admirably, but it’s going to be a tough sell given you can get a less flexible but more powerful laptop for substantially less money. Unless you absolutely have to have a convertible laptop you’re probably better off with a cheaper, less dextrous one.