Voonja is a new South African mobile app (currently in closed beta testing) built at the mLab business incubator in the Innovation Hub in Pretoria that wants to enable smartphone-wielding citizens to report on anything they consider newsworthy in their own areas. It’s aimed at providing the sort of hyper-localised news that often gets passed over, or simply missed, by conventional news outlets.

Available for Android and with an iOS app awaiting approval from Apple, Voonja harnesses the GPS antenna, camera and connectivity built into smartphones to enable users to create and share content to the service. 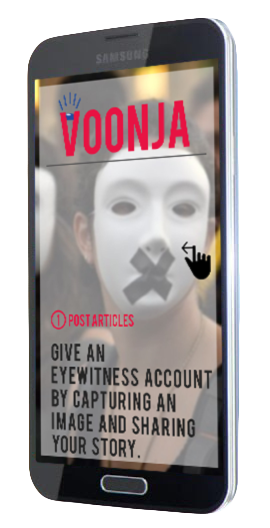 Voonja takes its name from the Swahili word “ku-vunja”, which means “breaking”. Founder Kim Chulu says the service aims to be as hands-off as possible when it comes to content. Basic vetting takes the form of every story having to include an image before it can be published to Voonja, the geotagging of which provides at least cursory, geographic confirmation of its legitimacy.

Thereafter, Voonja users can flag stories they deem inappropriate or unfair for removal, at which point Voonja staff will examine them and decide whether or not to remove them. At the same time, users can endorse stories to add to their credibility.

Stuff asked Chulu how the service intends to make money and he says the most likely model is through advertising, much like conventional media outlets – though there is the potential for regional, targeted ads given the service relies on smartphones – but that this bridge will only be crossed down the line once the service has attracted a large number of users.

Chulu says that even if Voonja does go the route of selling ad space it will remain editorially independent. He says the point of the service is for communities to create (and to some extent, curate) their own news and that the service is steering clear of dictating content at all because of this.

Considering the prevalence of social media services like Facebook and Twitter the question remains, will Voonja be able to attract users and encourage them to actually use the service to share rather than merely consume content? We’ll have to check back in a few months to find out.