Expensive equipment passes through the Stuff offices quite often on its person-to-person review journey before returning from whence it came a slightly more battered and bruised piece of kit. It’s so commonplace that we just about take it for granted but every so often something pitches up that reminds us just how pricey the products we see really are.

The latest of these is Vertu’s Signature Touch smartphone, which puts the previous model we had from the company, the Ti Ferrari, in the shade when it comes to specifications. At somewhat less that a third of the price of the Ferrari-based phone. Before you go thinking that this 4.7-inch smartphone has to be cheap, that still places its value at around the R48,000 mark. So… expensive enough to make us terrified of dropping it, then.

Solid as they make them

Does the Vertu Signature Touch look like the sort of phone that you’d drop enough cash on to purchase a second-hand car? From the outside… not really. It certainly looks different to most other phones on the market and the materials, which are (crystal sapphire) glass, titanium and calf-leather, are definitely premium but there’s nothing that overtly screams “I COST FIFY GRAND” at you.

Perhaps that’s a good thing though, if you’ve got this kind of cash to spend on a smartphone you’re not about to go yelling about it. But other people, the right people naturally, will know what you spent on the Signature Touch without you saying anything. So they’ll know that you know that they know… it works, somewhere along the line. But you’re not spending great big chunks of money on the Signature Touch for its looks anyway. Well, maybe a little of it is going towards the presentation. 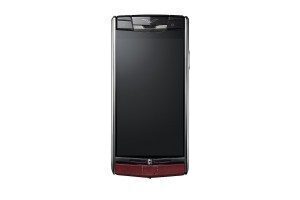 You’re not really spending all that cash for the specs, though they’re not bad for a luxury phone. In our admittedly limited experience, the specs for handsets like these tend to not measure up to the flagship devices on sale at any one time but Vertu have pulled out several stops to offer users some decent silicon. Not top-flight, mind you, but they’re giving users last year’s favourite processor in the Snapdragon 800, clocked at 2.3GHz. 2GB of RAM, 64GB of storage and a Full HD screen made from crystal sapphire glass are the headliners on the specs front but they’ve also gone for a 13MP, Hasselblad-certified rear camera that manages to nab some quite impressive shots when you whip out this fifty-grand phone to take pictures of your cat. Or fleet of cars, whichever you happen to own more of.

No, your money is being spent on Vertu’s various services rather than the looks or specs, both of which are not exactly shoddy. They’re just not the main focus with a handset like this. Most of what you’re paying for comes down to Vertu’s services, which come with the price tag – for 12 months, anyway.

In addition to a premium-looking interface (seriously, those icon look expensive) and some standard Android apps, you’ve got Vertu’s Concierge, Life and Certainty apps to look forward to. Certainty equals 12 months of Kaspersky protection, an equal amount of Silent Circle phone encryption, remote tech support and then unlimited connection to around 13 million WiFi hotspots around the world with a feature called iPass WiFi. Hey, if you can afford this phone you want data to come standard, right?

Life provides the Vertu owner with access to invite-only events, whether it’s social or shopping related. Obviously we couldn’t test this out, since we’re lacking in the pocket or jetting-to-Rome-for-the-weekend departments but VIP treatment through your phone sounds pretty good.

The best has been saved for last. Concierge is a personal assistant of sorts, or “personal lifestyle manager” as Vertu calls them, that will assist you with booking your flights and accommodation, help you locate items on your travels and just generally “facilitate your every request”. This is another item we couldn’t test, but that’s because we were scared we’d have to pay for it. But no, this isn’t a phone that we’d take out a loan to get, the best features require a lot more than the Signature Touch’s purchase price to use effectively.

Specs-wise, luxury phones are getting better but they’re still no match for the headliners from Sony, LG and Samsung. Maybe it’s better than the iPhone 6, as specs go, but then it lacks Apple’s usability. That’s not why you get a Vertu Signature Touch though, you get it because you want a personal assistant for your international travel while you spend your fortune on things the rest of us can only dream of. Would we buy one? Nope. But if we had the kind of cash the Signature Touch’s target market is suppose to have, perhaps we’d rethink that.