Stuff is all for cool cars, whether they’re looking good from the inside or are packing an attractive outer shell, and Merc have come up with a new concept vehicle that combines those two. The Vision G-Code is a concept SUV that features lines that we’re pretty sure we saw in 80s action films (not quite as ridiculous) but the in-car tech is innovative enough that even a Hollywood exec would have throw the ideas they’re using out as being “too silly”. 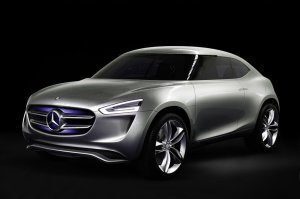 Not that we’re complaining though. The Vision G-Code is packing unusual engine tech in that it uses an electric motor to run the rear wheels but there’s a “turbocharged hydrogen combustion engine”, according to The Verge, running the front wheels.

Most of the methods used to charge up the G-Code’s batteries are pretty standard, with power being drawn by braking power and the always-useful wall socket but the Vision’s got a few other sources of power.

Electrical power can be generated by the vehicle’s suspension system, as well as the paint job. That’s right, Merc has added paint that can create power, called  ‘multi-voltaic silver’. Solar power is one method of juicing the batteries but the G-Code’s paint will also charge by using the wind that passes the vehicle while you’re in motion. That’s something we haven’t seen before.

The Verge points that that we probably won’t ever see this exact car in production but odds are that we’ll see some of these features appearing in future Mercedes products. To which we say: we can’t wait.