Intel Edison, the low cost computer that’s not much bigger than an SD card, is getting a nip and tuck in 2015.

“We’ll have a better Edison in 2015 that will be smaller,” says Brian Krzanich, Intel’s CEO. “I still have the vision that we can take all of the functionality we have on Edison today and put it in something that’s roughly the size of your coat button.”

“And it should be able to run on a battery, that’s about equal in size, for a couple of days. Which means that basically you can put a computer in the button of your coat. We’re pretty comfortable we can get there, whether at the end of next year or the beginning of 2016.” 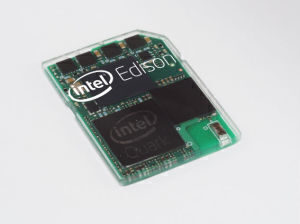 Speaking ahead of Intel’s Make It Wearable challenge in San Francisco, with finalists including Edison-powered camera drones, modular smartwatches and haptic necklaces, Krzanich says that building smaller and smaller computers to fit into fashionable form factors isn’t difficult. It’s coming up with the ideas.

“We’re asking ourselves – should we make some iconic devices where we push the technology and show people where this could go?”

“I’m not sure that in this space [wearable tech]that one device will be the end to all. I’m not sure you can make a device that is great for going out for a run or swim or bike ride that’s also great for your daily social activity, Facebook or Twitter, as well as something that’s a fashion statement. I’m not sure that will happen. But I do believe there will be some significant breakthroughs.”

One breakthrough that wearables sorely need is improvements to battery life and Intel is doing its bit. Krzanich hints at new Intel chips next year, a “very simple one” at the beginning of 2015 and a “more advanced one in the second half of the year” which will only activate the digital components and computing power when low power sensors are triggered.

“You can have an analogue part that’s always listening and always sensing, that’s very low power. Then if it sees something, whatever your sensor is monitoring, then this turns the digital side on. We have certain products coming out next year that really take this idea of putting the chip to sleep. And that impacts battery life quite a bit. A lot of battery is spent either sitting there waiting, in an idle state, or constantly pinging to see if you’re doing anything. And we think we can go the other way around.”

There’s no word yet on how long such a wearable device could last but Krzanich says that smartwatches that don’t last one working day are a problem and points to the Basis Peak which lasts a couple of days on one charge.

Intel also has plans for the Basis fitness and sleep tracker now that it owns the company. It’s good news for fashion companies looking to get into wearables as Intel is effectively killing the line in favour of opening up the tech to its partners. “We don’t think of the company and the brand as a product we need to build on,” he says. “We really think of it as a platform. So if Fossil wants to build a watch that has sleep tracking, step counting and heart monitoring we will just simply say – here it is. Here’s all the stuff you need to go do that, now build that into what you really want. You’ll see other sensors coming into this as well.”