We’ve enjoyed ourselves more with Fujifilm’s instax mini 8 camera far more than we’d care to admit in public, though for some reason we’re perfectly comfortable mentioning that fact in a review. For those who missed out on the review of the instax mini 90 Neo Classic, the instax mini 8 is along the same lines as the bigger, retro, Polariod-looking hardware that we had our hands on recently.

The main difference is that this instax mini 8 is a lot lower-tech that the Neo Classic, which eschewed most tech features to begin with.

This is immediately apparently when you pick up the camera. This little (sorta) unit comes in five colours, from a relatively sedate black or white option to the Pokemon-yellow camera that we had for testing. It catches the eye quite easily but you can also tell right off when holding the instax mini 8 that there’s some old-school hardware squirrelled away in there and little else.

The build is all plastic, the unit runs off batteries and there’s a tiny little viewfinder for aiming at your target subjects. There’s nothing like an LCD display anywhere near this camera, the film counter (yes, it uses film cartridges) even uses an analogue number-counter the likes of which we haven’t seen since those old roll-o-film cameras went out of fashion.

There’s no power button and the mini 8 turns on when you pop out the lens, something that is done by whacking the little button at the bottom of the ring selector. Otherwise there’s a shutter button, a light sensor and, at the rear, the AA battery bay and space to insert your film cartridges. 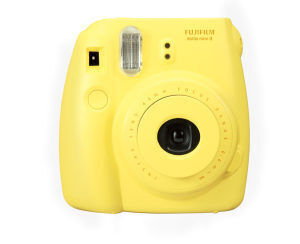 Point and shoot… and shoot again, this image sucks

Low-tech means there are fewer opportunities to screw matters up but we found that we were getting over- and under-exposed images quite often with the mini 8, mostly because we were not paying attention to the basics of use.

Taking a shot with the instax mini 8 is simple. Check which light is lit on the marked options on the top of the lens and turn the ring selector to the lit option. Hit the shutter button and await your instant wallet-sized photo. Easy, right?

The light-meter is doing the thinking for you here but it’s not all that intelligent. We found that standing in one spot and pointing the camera in different directions will give you different results, from indoor to direct sunlight, which need to be selected. End result? We wound up with some badly exposed shots but those can be put down to user error generally. We’re spoiled by autofocus and automatic exposure controls, perhaps.

The instax mini 8 is easy to use, though prone to weird behaviour in varied lighting conditions (like standing in the shade) and this leads to some costly mistakes. Unless you’re very careful, each botched shot is going to cost you – literally. Like its brother the Neo Classic the mini 8 uses film cartridges that work out to about R15 per image and there’s no option to delete a poor shot. You’re stuck with your mistakes.

Which is part of its charm, even if it’s an expensive part. The tangible, instant photos thing might get tired after a while but it’s almost a novelty when you first pick up one of these cutesy plastic cameras. The images feel more real, because there’s no way to go back and fix them.

Still, the instax mini 8 has the same downsides as other cameras in this line: costly film that you can burn through in moments, which adds up to an expensive and bulky load that you’d need to cart around in order to really capture everything you’re looking at.

We can definitely see the instax mini 8 getting some use by the hipster set, younger folks (kids will love the colour scheme) and anyone else looking to hark back to the days before smartphones cameras and instant Facebook uploads. It’s well suited for its purpose, if a bit pricey but that’s no reason to discard this camera from your list. You might just like its charm.