Korean electronics company Samsung wants South African’s to ditch their DSLR cameras in exchange for its mirrorless NX30 camera. It’s offering the first 100 people to visit the company’s stand at Photo & Film Expo at the Johannesburg’s Coca-Cola Dome this Saturday the chance to exchange their DSLR for a new NX30 camera, worth R10 000. 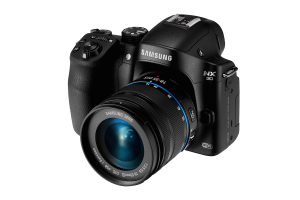 Samsung held its first “Ditch the DSLR” event in Times Square in New York City and says the event was so successful it decided to bring it to South Africa. After the Johannesburg event this weekend the company will host others in Cape Town on 29 and 30 November at the Canal Walk shopping centre before moving to Durban’s Gateway shopping centre on 13 December.

Michael Gibson, part leader for digital imaging at Samsung Electronics SA says eligible DSLR cameras simply need to be in working order and have no “structural damage”, like a cracked chassis or damaged display. Those wishing to take up the offer need to supply their existing DSLR camera, a working lens, battery and charger.

“For all those photographers who put away their DSLR at the back of a cupboard, or are simply looking for a change, this is their chance to finally cast off that old device and start enjoying the freedom of the innovative mirrorless camera,” Gibson says.

The Samsung NX30 shoots 9 frames per second, has a maximum shutter speed of 1/8000s and a “tiltable electronic view finder that can pivot upwards to 90° for vertical shooting”. The device also has built-in NFC and Wi-Fi and can be controlled via a smart device using the Remote Viewfinder Pro app.

Full terms and conditions of the campaign are available here.