Those who do know US company Qualcomm probably know it best for its smartphone chips which power most BlackBerry, LG, Motorola, Samsung and Sony handsets. But the US-based company is also positioning itself as the go-to for processing power for virtual reality (VR) headsets, autonomous devices (that is, robots) and augmented reality (AR) devices. 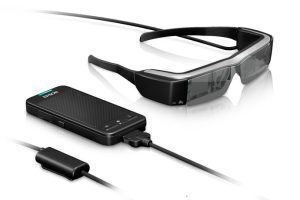 At Qualcomm’s Uplinq event in San Francisco last month VR headset manufacturers Epson, ODG and Samsung were all in attendance showing off what’s possible with the software developer kit (SDK) Qualcomm has released for Vuforia, it’s AR software, to encourage developers to build applications for the platform.

The Epson Moverio BT-200 headset looks like a large pair of sunglasses and features a pair of displays (one for each eye) and a front-facing camera that allow it to capture live video of whatever is in front of it and overlay it with useful information. On display was a water pump which, when looked at while wearing the headset was overlaid with instructions for dismantling it.

ODG, meanwhile, showed off its R-7 headset that uses a similar principle. Visitors could point the headset at a 2D map and see its topology in 3D, complete with points of interest markers and small, animated plane circling the summit. ODG also uses Qualcomm’s Snapdragon processors in the R-7 but, like the offering from Epson, the challenge for VR headsets remains battery life.

At the moment VR headsets either need cumbersome power supplies or to be tethered to a mains outlet to get more than short bursts of use out of them. The same challenges face Samsung with its Gear VR headset, which uses the company’s Galaxy Note devices as the in-headset display.

Stuff had a chance to play with the Gear VR and found it suffered from low frame rates and that even short periods of use really taxed the Note handset’s processor, making the device heat up rapidly in the process.

To date many AR and VR applications have been gimmicky at best – making animated visuals appear above catalogues or product packaging while offering little real-world usefulness, but with new devices like those from Epson and ODG the potential for practical applications becomes clearer. VR is great for simulations, training and providing instructions remotely. It’s also got great potential for providing additional information about real-world places or objects (an angle Google has been pushing with Glass). To this end, Qualcomm is also working with Aero Glass, a company that is developing VR for pilot training.

There’s also room for AR applications in retail, from trying on clothing virtually to testing whether or not a particular product will fit or look good in a particular part of the home. The best use we’ve seen of AR so far is in Lego Fusion, which combines physical Lego blocks with a smartphone and tablet app and renders building facades built with blocks as 3D structures in the app.

The challenge Qualcomm faces is achieving the sort of brand recognition that will make the inclusion of its chipsets or AR and VR applications actually influence consumers’ buying decisions for the better. As it stands, few outside the technically inclined recognise the brand at all. If it can take an early lead in AR and VR, though, that could change.