Asus has an event scheduled for 28th October – and it could well be that we’ll be getting our first official look at new ZenFone and ZenWatch models. 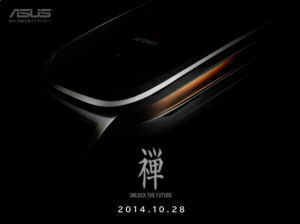 At the IFA tech expo in early September, Asus announced that its elegant Android Wear-running ZenWatch would be out by Christmas.

But now, its Japan branch has released a handful of teaser images that hint – maybe – at a new ZenWatch, as well as a new ZenFone. The other possibility is that the watch is the model we already saw at IFA, rather than a brand new smartwatch.

Looking at things optimistically, we could be seeing a new variant of the ZenWatch with different (i.e. better) specs than the one we’ve already seen.

The ZenWatch sports a 1.63in AMOLED display with a 320 x 320 resolution (resulting in a pixel density of 278ppi), in addition to a Snapdragon 400 chipset with a 1.2GHz CPU and 512MB of RAM. Not bad, but we’re hoping that if there’s a new ZenWatch it ups its game on the spec front.

As for the ZenFone unveiling, rumours have indicated at the company crafting up a 5.5in ZenFone device, which is predicted to debut at CES 2015 but we’re secretly hoping Asus is already done with it and ready to bring it to market. We’ve got a week more to speculate what’s coming before Asus confirms it for us.