Teachers everywhere are going to have another reason to keep smartphones away from their students when a new app, called PhotoMath, rolls out onto the market. 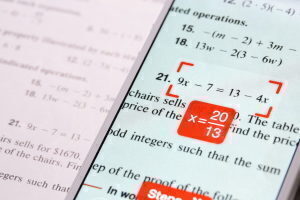 The company behind PhotoMath, Microblink, is taking a page from the Big Bang Theory TV show and have created an app that will return answers to mathematical formulas and expressions, providing results based on what your smartphone camera is able to see on the page.

According to the company the app “…reads and solves mathematical expressions by using the camera of your mobile device in real time”, adding that “PhotoMath currently supports basic arithmetics, fractions, decimal numbers, linear equations and several functions like logarithms.”

So, no, don’t expect it in any physics departments any time soon.

But, it will give users a step-by-step breakdown of how the answer was found, potentially helping students to understand the processes that are required to solve for X.

There are iOS and Windows Phone versions of the app available now, with an Android version in the works for early 2015, when Google’s OS will get some math-solving love. In the meantime, there are improved functions planned for the future as well but we severely doubt that an exam-friendly version of the app will ever arrive so maybe study your math homework as well, yes?