Mobile operator Vodacom has launched its own 7-inch 3G tablet called the Vodacom Smart Tab 3G. The device goes on sale in South Africa on Wednesday. It runs the KitKat version of Google’s Android operating system and Vodacom is selling it as a standalone device for R999 and bundling it with data packages. 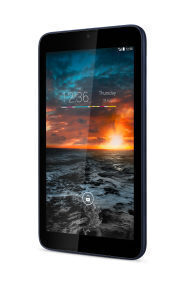 This follows the launch of the Smart Kicka in August, Vodacom’s budget smartphone priced at R549. The operator says it has sold almost a quarter of a million Smart Kicka’s since launch and that this is indicative of South Africa’s “strong appetite for well-priced, well specced devices”.

Phil Patel, Vodacom’s chief commercial officer, says the new device is the result of Vodacom spotting a gap in the market for smart devices that are suitably priced for South African consumers.

“We sketched out what we thought the ideal specifications were for South Africa, and using the purchasing power of Vodafone’s global device team, we were able to have the device manufactured at a price point that works out at R2 per day.”

The Smart Tab 3G weighs 275g, includes a 7-inch capacitive TFT touch screen with a resolution of 960×540 pixels and a basic 2-megapixel rear-facing camera. It also includes a 0.3-megapixel front-facing camera and includes 4GB of memory (expandable by up to 32GB via a microSD card slot).

Users that buy the device outright will receive 100MB of Vodacom 3G data for three months.

Patel says the operator plans to introduce another Vodacom-branded device before the end of this year.

The market for entry-level Android smartphones has been heating up in recent months with MTN releasing its own budget device and numerous handset manufacturers trying to tap this market. Stuff took a look at three such devices, the MTN Steppa, Vodacom’s Smart Kicka and the Alcatel OneTouch Pixi. Have a look at what we found here.