Facebook has the Oculus Rift in hand, Samsung will soon be launching their Gear VR virtual reality headset (which supports the Galaxy Note 4) so it makes sense that other options will be available on the market. One of those options is coming from Carl Zeiss, the company that arranges the camera lenses for Nokia/Microsoft’s Lumia cameras and it’s called the VR One. 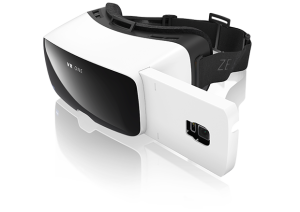 At the moment, on the pre-order page for the device, users can specify which drawers they want: the Samsung Galaxy S5 and the iPhone 6 (the 4.7-inch version) are supported right now but the page also has a section where other phone users can vote for their handset if they’re keen on getting a drawer for a specific model.

Engadget reports that the VR One will most likely support smartphones in the 4.7-inch to 5.2-inch size range. Multiple drawers will be available so you’re probably going to be able to get a single headset that will fit the whole family when it launches next year, unless you’re overly fond of the phablet form factor.

The pre-order price for the VR One is $99, or about R1,100. Additional drawers for the Zeiss-powered headset will set you back about R110. The setup comes with a couple of apps that allow for turning content into 3D and is expected to become available next yet.

Source: VR One via Engadget