Chinese hardware manufacturer Lenovo introduced the new versions of its Yoga tablets and laptop at an event in London last night. In addition to the anticipated updates to things like screen resolution and processing Lenovo showed off some novel feature additions, including a hole in the middle of the stands of its tablets that allows users to hang them like one would a picture and the inclusion of a projector and subwoofer in its new 13.3-inch Lenovo Tablet 2 Pro. 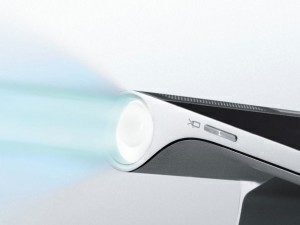 Actor Ashton Kutcher, who joined Lenovo last year as a “product” engineer, helped introduce the updates 8-inch and 10-inch Yoga tablets from Los Angeles via a live video feed. Kutcher’s famous face has also been used on many of the marketing materials promoting the new device and in a couple of quirky videos for it, one of which is included below. Kutcher says Lenovo’s research has found that 80% of consumers primarily use their tablets at home and that 52% of them watch live or recorded video content on their devices.

These findings, he says, prompted the company’s design decisions. In addition to announcing that its 8-inch and 10-inch tablets – all of which are LTE enabled, offer full-HD displays, include dual Dolby-powered speakers and promise 18 hours of battery life – will now be available in either Android or Windows versions, Kutcher introduced the Tablet 2 Pro and talked up its built-in Pico projector and 5W subwoofer, calling it “the ultimate home entertainment tablet”.

The Tablet 2 Pro’s projector is capable of projecting a 50-inch image at a distance of 2m and a resolution of 854 × 480 pixels. Lenovo says using the projector will cut the advertised 15-hour battery life down to around three hours, but that’s more than enough for a presentation or most movies. Given the device’s enormous 13.3-inch QHD (2 560×1 440 pixel) display, 15 hours of regular use is nevertheless impressive.

On the storage front, the Tablet 2 Pro offers 32GB out of the box, which can be expanded by up to 64GB via microSD. It also includes an 8-megapixel camera and is available in Wi-Fi only or Wi-Fi and 4G iterations. Prices start from $499, so expect it to cost at least R6 000 when it lands in South Africa.

Aside from its new large-format tablet the other star of the show was Lenovo’s new Yoga 3 Pro convertible laptop. Lenovo PC Group’s vice president for marketing and design, Dilip Bhatia, introduced the laptop which like its predecessors includes a display that bends all the way around the device for a tablet-like uses. Promising 9-hour battery life and a mere 12.8mm thick the Yoga 3 Pro includes a QHD+ touch display with a resolution of 3 200×1 800 pixels, is powered by an Intel Core M-70 processor, includes 8GB of RAM and is available with various sized solid-state drives up to 512GB.

Bhatia says that almost 50% of the world’s convertible laptops are Lenovo devices and that the company has included a range of smart software features that are detect the position of the display and optimise the device accordingly. For example, when the display is folded into tablet mode by default the display settings are optimised for reading.

Lenovo isn’t the only device manufacturer making convertible laptops, but its certainly one of the best. Stuff had the chance to handle the new devices and was thoroughly impressed by the build quality and high-quality displays on all of them. Every device in the updated range is also surprisingly sleek and lightweight, and there isn’t a piece of plastic in sight.

The Yoga 3 Pro is definitely a strong contender for our Windows laptop of the year and, like its predecessor, is simply the best convertible laptop we’ve ever used. Prices start from around $1 300, so expect it to cost at least R15 000 when it lands locally.

Though Lenovo wasn’t able to confirm an exact date when the new range will be available in South Africa a company representative says the devices will go on sale in the region before the end of the year.