Well, we knew pretty much everything about it weeks ago, but HTC has officially unveiled its new action camera, the RE. 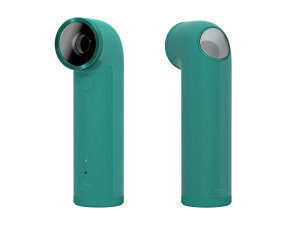 Sporting a cylindrical shape that the company says makes it far more comfortable to hold than rivals such as the GoPro, the RE has a built-in grip sensor that can automatically start the recorder rolling when you pick it up. If you prefer to do things the old-fashioned way, a single shutter button operates both still and video shooting: tap it for the former, hold it down for the latter.

The RE has a 16MP CMOS sensor and f/2.8 ultra wide-angle lens, and can capture 1080p footage at 30fps as well as time-lapse and 720p 120fps slow-motion. Pictures and video are stored on microSD card (an 8GB card will be included in the box), but use the dedicated Android or iOS app and you can also back them up to your phone or the cloud automatically. The app also acts as a remote viewfinder for the camera and, in a future update, will allow users to livestream footage direct to YouTube.

The RE, which is also dust- and waterproof and has a battery enabling up to an hour and 40 minutes of footage to be recorded, will be available to buy internationally from early November. HTC has yet to announce a price.