First impressions can be a right bugger. You try and put your best foot forward and something happens and suddenly you’re that guy who’s known for taking his pants off and running screaming from the job interview. Nobody stops to think that your arachnophobia and the large spider that was crawling over your thighs might have had something to do with it. No, you’re just a loony.

This all has a point. First impressions of the BlackBerry Passport around the Stuff offices were almost universal. Comments on the phone’s size, shape and overall looks were tossed about and they were not very positive. Not all of the things said about the Passport were incorrect but enough were that we felt bad about our first impressions – we’re seeing things from the side of the man with no pants, so to speak. The BlackBerry Passport is a very square handset, featuring the extremely odd resolution of 1,440 x 1,400. This is where the first impression comes in, for folks used to the the rounded rectangle industry standard that proliferates. The Passport’s square display is extended at the bottom by the QWERTY keyboard/touchpad, making this one of the larger phones we’ve ever handled.

In typical BlackBerry style, the Passport is a sturdy device all round. The smooth rear, non-removeable panel is emblazoned with the BlackBerry logo while the whole phone is edged with a thick strip of metal along the sides, with a thinner strip across the top and bottom edged bordered by black plastic.

The headphone port resides at the top and the charge port, a standard microUSB is at the bottom with the speaker vents. The review handset we used came with the textured plastic cover that removed our worries about the smooth rear panel causing a slip with one-handed manipulation of the phone. It does add a fair amount of thickness to the handset but it’s chunky regardless so the extra peace of mind is worth it. The Passport is a weird-looking phone, there’s no doubt about that, and that makes it easy to overlook the fact that the company has packed in some of the heaviest-hitting hardware that we’ve seen in a BlackBerry. Ever. The Snapdragon 801 and 3GB of RAM are just the starting point, there’s 32GB of storage and the option to add more are just the start.

BlackBerry OS 10.3 runs like a greyhound after a mechanical rabbit on the hardware, there’s no hitching when swiping between the Hub and whichever apps you have running. BBM and BlackBerry’s other apps like Story Maker, and Blend are installed from the start, as are LinkedIn, Facebook, Twitter, Box and Dropbox as well as Foursquare. Just the thing for the up-and-coming business person. For other apps, you have access to the Amazon Appstore which gives you access to some Android-ish apps as well. It’s not quite Google Play but it’ll get the job (mostly) done.

BlackBerry have also included a rather nifty 13MP camera which has optical image stabilisation and an LED flash. It’s not up to the standard set by LG and Sony in recent releases but it’s not far behind either. And then there’s that full-on physical QWERTY keyboard… 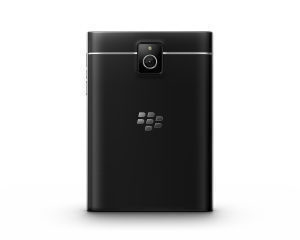 But you’re not going to like it if you’re used to using your phones one-handed. It’s just not possible, unless you have the sort of mitts that deserve the title. Most use will come from having the Passport grasped at the bottom, with your thumbs ticking away on the QWERTY keyboard – it’s designed for the stereotypical high-powered-but-tech-impaired executive but in practise the two-handed method is comfortable and fast when you’re sending messages and emails upon which hang the fate of the company.

Attempt the same thing one handed and the combination of physical keyboard and intelligent pre-empting of word choices means that you will be sending garbled messages attempting to hold the Passport in a single hand. But at least the keyboard acts as a touchpad so you’ll at least be able to scroll with a single hand.

The BlackBerry Passport is going to attract its share of funny looks, outright hatred and affection. It’s definitely not for everyone though and those who are used to a more consumer device, like the majority of Android phones, will find it too businesslike for their liking. But it’s also a shining example of a BlackBerry phone done right – if it’d been released some time ago folks would have gone gaga over it. Even now they still might and they’re right to do so.