The first-ever Oculus Connect conference kicked off this weekend, and luckily Oculus VR was ready with big news for attendees: the revelation of the new and much improved Crescent Bay Prototype. 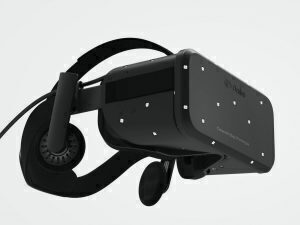 The third-generation prototype headset offers a significant leap over the previous Development Kit 2, packing in a sharper display (likely the same as the Samsung Galaxy Note 4), 360° head tracking via new sensors all around the unit, and integrated audio. Collectively, they provide a sense of “presence” and deliver even more immersive experiences than before.

Additionally, the Crescent Bay Prototype is lighter and said to be more comfortable than previous iterations, showing a significant overall leap in quality in a short span of time – a good sign for those still desperately awaiting a release target for the eventual consumer edition.

Of course, the Oculus-assisted Samsung Gear VR headset will beat the Rift to retail later this year using the Galaxy Note 4 as its brain and display, but that will be a much simpler and more streamlined virtual reality experience compared to what the latest Rift prototype promises.

Oculus didn’t just reveal Crescent Bay, but also allowed attendees to test it out in a room that let them move around on their feet and experience new gameplay demos – such as Showdown, a cinematic, futuristic action experience from Epic Games that runs on Unreal Engine 4. Oculus also announced that indie-friendly game engine Unity now has official Rift integration available.

While Oculus cautions that Crescent Bay is still “incredibly early hardware,” this is exciting news for the Facebook-owned VR platform. Now all we need is a release target for a consumer version.