The time has come to replace or upgrade your TV and you’re battling to decide which model to get. There’s always the option to pick up a projector, if you’re the sort of person that doesn’t have a whole lot to do with broadcast television but we’re not about to argue the merits of projector vs. TV here. We had our hands on something a bit different in the projector line with Xsories’ X-Project WiFi just lately, a highly portable and pretty versatile little number.

Unfortunately if you’re looking for a TV replacement then the X-Project WiFi isn’t what you’re looking for. It’s more suited to taking on the road, where you’re planning on hanging a bedsheet between two trees and having an impromptu movie night while “roughing it” on a camping trip or something. It has its uses in the home as well but external or office use is where this little projector will find the most use.

Palm Of Your Hand

The little X-Project WiFi is tiny enough to fit on your hand, measuring just 10cm or so on a side. It’s extremely lightweight as well, there’s almost no noticeable weight in the front where the lens and lamp are sitting so you could put it just about anywhere.

There’s a little focus adjustment dial on the top, along with a trackpad (yes, really) for controlling the unit in the absence of the included little remote. The major inputs, for the SD card and mini HDMI/USB ports, are arranged on the back of the unit along with the headphone and power holes and you can jack in an AV on one side or a USB flash drive on the other. All in all, everything is in place in a fairly small area. 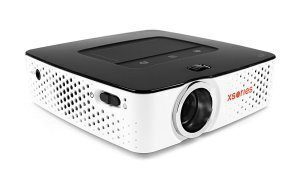 The X-Project WiFi has a fairly basic interface, one based around Android 2.3.1, so don’t expect any flashy looks. It’s quite functional though, provided you avoid the top-mounted trackpad in favour of the remote control for most things (or even the Android/iOS remote control app, if you’d prefer to use your phone). Navigation with the trackpad is a nightmare unless you’re extremely patient and even then the movement on the top of the projector will often knock the projector out of alignment. In case it wasn’t clear before, this unit is very small and it doesn’t take much to make it move.

There is one time where we found the trackpad essential and that was to bring up the keyboard to enter the WiFi password for our network. For some reason the remote won’t let you achieve this so you’re going to be juggling input methods at times. The remote control serves for most uses however, once you’ve completed setup. 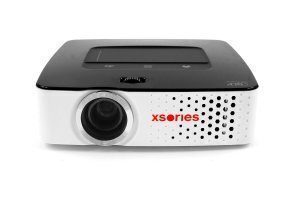 By now you’re probably wondering where we’re getting to the ‘WiFi’ part of the X-Project WiFi. It streams video content over a network well enough, once you’ve cleared the whole entering-the-password hurdle. How well? About as well as the PlayStation 3 or Xbox 360 we have connected to the same network but with the added bonus that the X-Project supports a lot of file types. More than the two consoles, at any rate. Especially impressive was the native .MKV support though good luck getting the projector to recognise embedded subtitles.

And then there’s actual performance. We ran the X-Project WiFi in some lengthy sessions, over four hours at a time, and the projector remained fairly silent throughout. This isn’t possible outside however, you’re looking at, at most, about two hours of play time when away from a power outlet so no Michael Bay movies for you. The projector has its own internal speaker, which would suffice if you were on a camping trip, but we also connected an external speaker to the headphone jack to get some decent at-home sound out of it.

But don’t go thinking that you’ll be able to use this as a TV replacement. The X-Project isn’t bright enough to be used effectively during the day unless you’ve got a way to make sure that there’s little to no daylight in a room. Full darkness, with all of the ambient lighting in the area, is preferred to get a decent picture from the projector. Even then, a lamp in the next room has enough light to wash out the colour and detail being projected and that can wreck your experience a tad.

The X-Project WiFi is certainly a versatile little projector but it’s hampered by its size, battery and operating system to some degree. Ideal for use on the road, in a boardroom as a presentation additive or even around the home, it loses out to larger, fuller featured projectors in several categories. But that extensive native file support is nice to have and it makes for a good little portable cinema thanks to its ability to play content from a flash drive.