We spend our lives developing habits. Some of these are good ones, others are less than useful but modifying a lifetime of behaviour is quite a chore. But, as Apple is fond of saying, there’s an app for that. One that makes use of video game thought processes to help users to achieve their goals, daily and long-term. 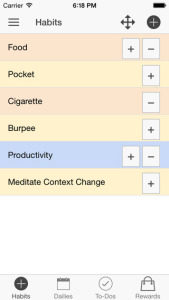 Habit RPG, as the name implies, turns your life into a little role-playing game where you are able to earn experience, lose health points and maybe, just maybe, get that laundry list of items around the house and office done without noticing it whooshing by. The app got a boost back in February this year when they pulled in $41,191 on a $25,000 Kickstarter goal and it’s since hit the Apple and Google app stores. So how does it work?

Habit RPG uses something called gamification, which is literally transplanting the thought processes and reward systems found in video games into the real world, to get users to alter their usual patterns, complete tasks and avoid putting off the dishes for the third week running.

Everything is collected under one of three lists. There are Habits, which users can assign themselves, that can have either positive or negative consequences. There are Dailies, which must all be completed every day. Miss one and you reap the downside. Then there are the To-Dos, which like the others are custom items but these differ in that there’s no real time period to watch out for. You’re rewarded when they’re done. 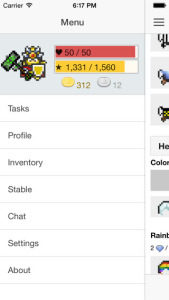 Hit all of your targets and you are given gold and XP (experience points). Fail to do something and you lose health. This is a lot like going to work (gold + XP) or forgetting to eat (you feel bad) but it hits the points in your brain that video games exploit to keep you playing. There are short-term rewards to be had: you can spend your gold on new gear for your little avatar or set your own upside – 10 gold isn’t much to pay for that greasy snack you’ve been avoiding, after all.

The point is that users will be constantly rewarded in small ways, which should in theory compel you to continue a particular line of behaviour. You’re after that new level, and the resultant health refill, though you can buy potions that will keep your character going in the face of persistent bad habits, or you’re looking for a new item of armour or weapon to take into battle.

So Does It Work?

Its effectiveness really depends on the player/user. We’re keen gamers so we’re used to the concept of quest-to-reward in short order. That might be why we’ve found that assigning the stuff we’ve been putting off has been getting done with much less fuss than before but someone without a gaming background may not have that sort of success. But seriously, you should see our kitchen. It sparkles now.

It also depends on how honest the user is. Since all of the inputs are done by the user (though we’d love some sort of fitness band or smartwatch assistance), it’s up to you whether you’re going to lie to the app. And yourself. But, if you’re serious about changing the way you do things, that’s not something that’s going to happen. Is it?

Not The Whole Thing

Habit RPG is a little bit limited in terms of the app itself. For the full experience, users need to head on over to the website where there are far more features available. Several of these, like Guilds and boss fights, have crossed over to the app and the developers are adding new features whenever possible but using the desktop browser interface in conjunction with the app is the best way to make the most of it. The social elements that rear their heads when you rope in other self-improving friends can also be a powerful motivator.

Just mind the microtransactions, which are used to enable some features like starting a Guild or buying some of the cosmetic additions to the game/app. Users have to buy gems in order to do some things, which can get pricey for South African wallets at $5 for 20. Or you could buy a monthly subscription at $5 a month and spend your hard-earned gold on gems – either way, it’ll cost you. Good thing it’s mostly optional.

We can’t say that Habit RPG will work for everyone but, at its base (free) level, we’ve noticed a few changes in our own behaviour. Given how set in our ways we are, odds are good that at least a few others will see the same results. If nothing else, you’ll be able to boast that doing the dishes is now a mighty quest on your road to that new sword you’ve had your eye on.