Samsung makes speakers now, that’s something in keeping with the company’s approach to the tech sector of late where they appear to be trying to seed their products in just about every aspect of the market. How do they do when it comes to creating Bluetooth sound additions to your mobile devices though, that is the big question.

The answer to it is: not badly at all. At least, when you consider the Level Box mini, a smaller version of the company’s Level Box.

The Level Box mini is available in several colours, making it something of a fashion accessory, but we had our hands on the blue version for the review. It’s a light-weight, metal-encased speaker that feels as though it might float in the bathtub. Don’t take that as advice that you should actually try it, it’s not waterproof at all but that’s the impression you’ll get from holding it. It’s about as heavy as a cellphone but spread over a wider area.

Most of the Box mini is covered in mesh, with the main controls being present on the top of the unit. Volume control, the NFC area and the power buttons all grace the Box mini’s upper side, while the speakers face outwards. The trick is to figure out which side is the front side, something that isn’t readily apparent if you’re using this little Bluetooth speaker for the first time. 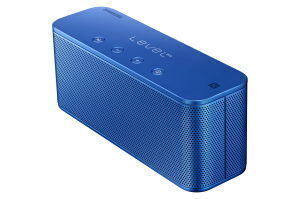 Once you’ve figured it out, by noting which end the sound emits from, the Level Box mini is a surprisingly noisy speaker. Not quite at the level of the Jawbone Jambox, which this unit resembles – minus the stylish design tweaks that Jawbone favours – but it’ll fill quite a large room with audio if you’re planning on starting a party.

That said, the Level Box mini’s sound effectiveness will vary depending on where you have it placed. Omni-directional sound isn’t its strong suit and we noted that, when using it as a personal audio device at lower volume levels, the speaker should be placed at about head level with the speakers facing the user for accurate sound. Having it too high or too low leads to muffled music, like you’d left a pillow lying on top of the speaker.

At higher volumes leaving it in the centre of the room on a table is enough, though clarity depends on where in the room you happen to be standing. It’s up to you how to use it but this is the sort of thing that should be resting on the edge of a blanket while you take a pleasant picnic with all of your other Samsung devices.

Battery life in the Level Box mini is decent enough, it should keep you going for a good few hours at the very least. Samsung claims 15 hours on a charge with the 1,600mAh battery but we found that it does a little less than that. You’ll be able to run it flat in six to eight hours of constant use but mostly it’ll top the 10 hour mark, provided you don’t leave it running and just forgeta  about it.

Actually connecting the Box mini to a smartphone or other Bluetooth-capable hardware is simple enough. If you’re on a phone with NFC, all of the work is taken out of it but you’ll also find and pair it up easily enough with more traditional Bluetooth connection methods. We’ve had trouble with Bluetooth speakers in the past, this little thing doesn’t exhibit any issues. If there is one complaint, it’s that it is hard to see, visually, whether the Level Box mini is set to pair with a Bluetooth source, leading to some false starts.

All-in-all, Samsung’s little speaker is an impressive outing for the company. Unlike the Level Over headphones, it’s hard to tell that Samsung has made this as the design cues have come from sources other than the Galaxy range of mobile devices. Still, it sounds good enough to constant use and has a battery to match – what more do you need from your portable speakers?