The 2013 film Her pointed to a future of ubiquitous digital assistants – and now Motorola’s bringing it to life with the Moto Hint.

The trouble with current voice-controlled devices like Siri or Google Now is that using them is a bit of a faff.

If you’re not wearing headphones and a mic, you have to take your phone out of your pocket and hold it up to your mouth to talk into it – and by that point, you might as well just unlock the screen and tap away. 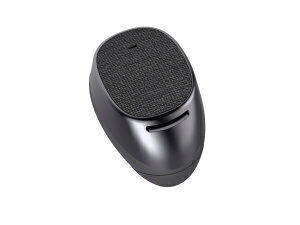 Moto Hint aims to change that. It’s a Bluetooth earbud – don’t, whatever you do, call it a “headset” near a Motorola rep – that slips almost invisibly into one ear, piping your voice assistant directly into your lughole.

From a distance, you’d struggle to notice that it’s even there – we didn’t clock the Moto execs wearing them at the launch event, at first. Up close, the optional Moto X-style wooden finishes make it look just like something from Her‘s retro-tech world.

Say ‘Good morning’ when you first pop it in, and it’ll serve up the details of the day’s first meeting; say ‘Goodnight’ and it’ll switch your smartphone to sleep mode.

But you don’t need a Motorola to get an invite to the party. Other Android phones can be used with the standard Google Now command phrase. The Hint can even work with Siri on iPhones although this isn’t completely touchless. There’s a small capacitive touch area on the Hint that iPhone users will have to tap to activate the iPhone’s voice assistant.

The battery life isn’t great – 3.3 hours for the Hint itself with an extra two charges in the neat charging case that Motorola is launching alongside the accessory. Plus IR sensors provide extra cleverness to extend the battery life as it turns itself on and off. The sensors can detect when you push the Moto Hint into your ear (which requires a bit of twisting to get it snug) or take it out.

We tried sticking a Moto Hint in our ear at the Chicago launch event – it was too big for our tiny ears but there’s three different sizes of buds. But we weren’t able to test it out ourselves just yet – check back for our hands-on impressions as soon as we can prise one from Motorola’s hands. We said Moto Hint is from the future – and we weren’t joking.

There are no concrete details on when it will be seen outside the States but Motorola has put the timeframe as ‘in the coming months’. Expect a South Africa launch some time after that.