Sony has an absolute heap of new products at IFA this year, from a smartwatch to new phones, televisions, and tablets – but curiously, a Walkman caught our eye amidst that lineup. 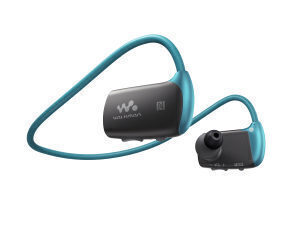 The Walkman NWZ-WS610 line delivers an all-in-one wearable portable music experience, with the music player built right into the earbud panels and a snug band that wraps around your head. There are no wires to worry about, and nothing to keep in your pocket if you don’t want it.

That makes it plenty ideal for fitness use, and the NWZ-WS610 line is not only waterproof for sweat and rain, but it also comes with special earbuds for swimming. And that’s not all: it’s also a Bluetooth headset.

As such, you can pair it with a smartphone or any other compatible device to stream music from apps, get audio notifications, and more, and there’s a built-in microphone. Sony promises about eight hours of local music playback, with about half that when connected over Bluetooth 4.0.

This new Walkman is set to launch in the UK in October, with the WS615 packing 16GB of internal storage, while the WS613 offers just 4GB. Both are available in black, blue, and lime green colours. Pricing for South Africa, as well as a release date, are not available yet


Sony also has a new High-Resolution Audio player on the horizon, with the Walkman A15 dubbed “the world’s smallest and lightest” such device for audiophiles. Its S-Master HX digital amplifier processes Hi-Res audio files for crisp and clear playback, with 30 hours of battery life promised.

And the A15 is much more affordable than the previous NWZ-ZX1, which impressed us in almost every way except for its exorbitant price. Sony’s new High-Res Audio player will sell for just R3,000 in South African money when it debuts in Europe next month – but it comes with just 16MB of internal storage. Luckily, it accepts microSD cards, so it’s not only much cheaper, but you also have more control over its capacity. Again, local pricing and availability will be a while in coming.