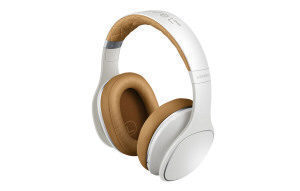 Going up against the likes of Beats, Jabra, and any number of other headphone makers, Samsung have their work cut out for them. How do they stand out from the rest of the crowd, all of whom are making wireless Bluetooth headphones for an audience that frequently knows exactly what they want? Well, the Samsung Level Overs are a pretty good first try.

There’s no mistaking that these headphones come from Samsung. Similar design elements, like the shiny white (or black) plastic that is used for much of the construction of these headphones which has been taken directly from the company’s range of smartphones. The soft padded sections also feature similar colouring and stitching to the rear-ends of many current Samsung devices so at least you’re going to be using matching tech if you connect these wireless headphones to a Samsung phone or tablet.

In terms of comfort, the Level Over headphones are heavier than they look but they are also surprisingly comfortable for cans that have very little in the way of adjustment options. The headband can be lengthened and the ear cups have some movement to them but not as much as we’ve seen in other gear – even so, Samsung’s headband is flexible enough that the Level Overs will stay in place and remain comfy for extended periods without becoming an irritation. 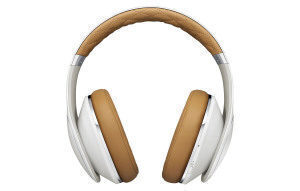 All Over the Wires

Packed in the box for the Level Overs is a hardened carrying case. Samsung seems to want these to travel with you, since there’s a second pouch with cabling and an airplane adapter inside, for charging the headphones and using them with a wired connection when the built-in battery is flat. Since the Overs are not collapsible at all the hard casing is a nice addition, though it’s large enough to make transporting them anywhere except inside luggage an uncomfortable experience.

Of course the wires are optional. Volume is controlled by an in-line keypad when using the Level Overs in a wired configuration but connect them to a mobile phone using the Bluetooth connection and you’ll be able to control your media by using a touchpad that sides on the side of one of the ear-cups. A double-tab will play or pause, a vertical swipe raises or lowers volume and song selection is achieved using horizontal swipes. Overall, convenient, easy and effective and something that more headphones should implement. 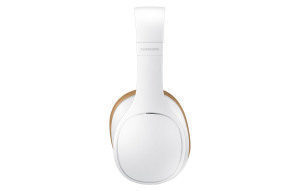 But the preceding is all useless without the sound chops to back it up and here Samsung’s headphones are able to perform well enough. There are some niggles but for the most part the Level Overs are a bassy set that will block out the world around you. If you’re looking for something to going along with club tracks, you’ve come to the right place.

Sound aficionados will find that the mid-range won’t be to their liking though, being flatter than we’d like it to be. It’s not a deal-killer for most users though, enough thumping bass is usually enough to make up for any other discrepancies for a certain type of person. The volume is also something that we cannot complain about, the Level Over headphones are loud enough to deafen you over long periods, all while drawing some funny looks if you’re out in public.

Samsung’s Level Over headphones are an interesting choice from Samsung and we actually hope they continue producing them. This first outing for the lineup shows that there’s a lot of potential here, even if they haven’t hit all the right notes this time around. The Level Overs are still a good choice for anyone wanting Bluetooth headphones with earcup controls – we were especially taken with that feature and would like to see more of it. Are you other companies taking note?