So you think you’re a PC gamer, do you? Being a member of the Glorious PC Master Race, in South African terms, generally means having the best hardware and being able to take it someplace where other people can bask in the reflected glow of your awesomeness. But when you spend in excess of R30k on a gaming setup, it’s usually quite hard to move it into a car for a LAN. Usually.

The Aorus X7 v2 gaming notebook will set you back about R34,000 but for your cash you’re getting a Core i7, Nvidia SLI rig squeezed into a computer that has a maximum height of 22.9mm and weighs in at around 3 kilograms. It’s a bit like ordering a burger and getting a pill instead, only the pill tastes just as good and fills you up just as much.

The Aorus X7 is a series of angular lines and lights, from the 17.3-inch LED backlight display – Full HD, of course – to the backlit keyboard and the power button which all light up in one way or another. Perfect for gaming in the dark, when you’re concentrating on your objective and don’t have time to get fumble-fingered by misplacing your hands. There’s an overall military or sports car feel to the design, you’d expect this to be sitting in the cockpit of a fighter jet. It wouldn’t look out of place.

Did we mention just how skinny this gaming notebook actually is? That’s one of the prime draws for the X7, it’s not a whole lot thicker than a run-of-the-mill machine but it packs more power than some gamers have seen in their lives. This does mean that there are some concessions to be made in terms of the engineering, which we’ll get to a bit later. 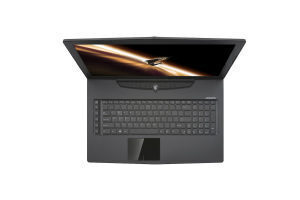 In terms of gaming-ready components, you could throw anything available on the market today at the Aorus X7 v2 and it’ll just bounce off. This machine has gifted players with the Core i7-4710HQ and 16GB of RAM, at least in the review model that we had on hand. There are two GeForce GTX860M graphics cards squeezed into the notebook. Somehow, at any rate. Where they’ve managed to find space is a little engineering mystery.

Performance-wise, you’re not going to get any better than this in a teeny 2.3cm-thick laptop. We’re not going to bore you with benchmark figures, as impressive as they are. All that you really need to know is that the major games, especially shooters, will look far better than their console counterparts – and we’re including the PlayStation 4 and Xbox One on this list.

But all this power comes at a price. While the Aorus X7 will idle along at a relatively cool 27 degrees, punching the graphics cards will push the laptop over the 80 degree mark. The X7’s fans make quite a noise trying to keep the temperature down but you’re still not going to want this sitting on your lap for very long while gaming.

The other aspects that are a bit squishy are the display. Poking the back of the casing will see the screen warp, something that was inevitable with the efforts to slim this machine down. The keyboard, while backlit and sexy, is also softer in the middle than we would have liked. Key presses give the area a dip where the keyboard doesn’t have the support it needs. Not a gamebreaker but we probably have to learn to keep calmer in the heat of combat if this is the case.

Lastly, there’s the trackpad. Perfectly serviceable during day-to-day use it, like every other gaming notebook, is an exercise in futility if you’re attempting to use it to play games. Long story short, add a third-party mouse to this setup.

With the main hardware being this high-end, you can expect the X7 v2 to feature the sound, connectivity and other features to match. As a pure gaming machine, albeit a portable desktop replacement of a full system, the Aorus X7 impresses across the board. It has its faults, most of which arise as a result of having everything packed into the smallest possible space but even that can secure you bragging rights. And if you’re at a LAN you’ll know just how important those can be.