It’s an age-old tale. A man’s family is murdered and he sets out to take revenge. That’s about it but in this case Marius Titus, the protagonist of Xbox One launch game Ryse: Son of Rome, goes about his revenge against the barbarians who have slain his mother, sister and father in a much more honourable fashion than your average story of blood and vengeance. But, since this game is set in ancient Rome, there is plenty of blood and more than a little vengeance to be had. Ryse: Son of Rome is supposed to be a showcase of the Xbox One’s capabilities and it is that, to a certain extent, but the main attraction here will be the all-too-brief story of Marius’ actions, in Rome and Britannia, as he completes his quest with all of the virtue of the Roman ideal. As a character, Marius Titus is what people should aspire to be: selfless, good, able to put aside his own wants in favour of a greater goal. His ability to cut large swathes of limbs from hordes of enemies just happens to be a pleasant bonus for a Roman soldier.

That said, the progress of the story and the development that Marius undergoes during the events of Ryse are fairly predictable. It doesn’t detract from the fact that Ryse is well-told throughout, with hints of the supernatural peeking through at times but never offering more than a hint of the mystical to the narrative. Until the conclusion, at any rate. If anything in Ryse is going to hold your attention for more than an hour at a time, it’s the single-player campaign. Ryse developer Crytek are known for their ability to create high-end visuals and they’ve certainly delivered here. Though graphics on the Xbox One will likely improve over time, Son of Rome is a benchmark for other developers to shoot for. The big question is: how did Crytek get these visuals looking the way they do?

The answer is that movement and combat have been very tightly controlled into a series of predefined sequences. Stock battling becomes highly repetitive, with certain enemy types falling only to a set sequence of attacks. This limitation, along with a very limited set of opponent types (grunt, speedy, speed with dual weapons, heavy, heavy with shield, juggernaut), means that standard combat can get boring quickly. This can be alleviated by dealing enough damage to enemies to trigger Executions. Executions are your slow-motion graphic kills, where enemy throats will be pierced, limbs removes and, in extreme cases, you’ll use one enemy to kill another one.

Damage an enemy enough to get a skull icon, or open their guard enough for a red icon that signifies a quick kill opportunity, and you can start one of many QTE kill chains. All that is required is that players hit the correct button as soon as possible after Marius flashes a specific colour. The kill chain will complete either way, you’re basically using reaction time to garner more experience points so that more executions can be unlocked.

These kills, which also get somewhat tedious after a while, are brutal, bloody and, most importantly, will confer health, focus, XP or damage boosts on Marius when they’ve been pulled off correctly. Health bar is low? Stab someone in the kidneys. Want to buy that next upgrade? Impale someone on spikes. Watch the pretty animations and then head off to kill the next lot of whatever’s dumb enough to run at you with a weapon drawn. You’d think they’d learn. 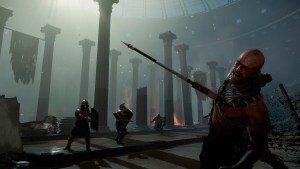 Once you’re done with the gorgeous looking but stilted gameplay of the single player you can take your skills online with the co-op mode that puts players into the shoes of a gladiator at the Coliseum. Players will use the same gameplay, with the option to revive their team mate, to take down waves of enemies in the arena.

Successful completion equals rank upgrades, awards in the form of gold which is used to upgrade player gear and pride in knowing that the crowd’s bloodlust has been satisfied. If you can get beyond the repetitive combat, taking on the Coliseum is actually rather fun. There are a whole collection of DLC arenas that can be purchased as well, though it didn’t play nicely with our accounts at the time of review – the SA Xbox One store isn’t live yet.

Ryse: Son of Rome is just a tech demo of what the Xbox One can do but it’s a fully-featured one. It’s pretty, bloody, features a fantastic story but is limited by the combat which isn’t as broad as we’d have liked at all. That said, you’ll probably still enjoy playing through the campaign at least once and the Coliseum awaits thereafter. Go make your chosen god proud.