If virtual reality headsets like the Oculus Rift are truly going to immerse wearers in their digital worlds, they’ll need to drop the game controllers – at least for some experiences. Leap Motion wants to help. 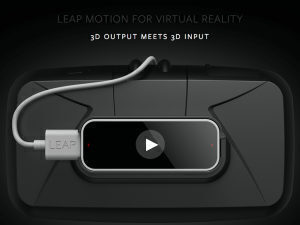 Leap Motion has announced that it has big plans for virtual reality, making a rather forward public push via a blog post and the clip embedded below. In the present, Leap Motion hopes to court VR developers with the release of a $20 mount that lets you affix the current Leap Motion Controller to the front of a headset – particularly the Oculus Rift Development Kit 2, and it does so without affecting positional tracking.

You can see how effective such an arrangement could be in the video, which shows a player’s hands clearly identified by the controller and used to manipulate in-headset items. And because of its wider field of vision, it will recognize your hands before the Oculus Rift DK2 even shows them.

That’s the short-term benefit that Leap is proposing, and the company hopes that developers will take note. But Leap doesn’t just want to have its Controller attached to existing headsets by hobbyist programmers and early adopters.

More significantly, it wants to be part of the next wave of VR devices, which is why Leap is also working on a Dragonfly prototype sensor. Co-founder and chief technology officer David Holz promises it will deliver “greater-than-HD image resolution, color and infrared imagery, and a significantly larger field of view.”


We’ll surely see more about this new sensor before long, but If that doesn’t sound like an open invitation for every VR headset maker to drop Leap a line, then we don’t know what it is.