It’s been rumoured for a long time, now it’s happening: Apple has sent out invites for an event on 9 September. 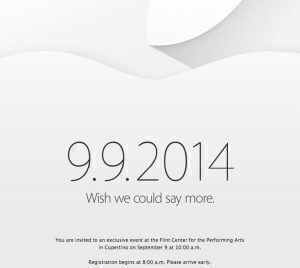 Widely expected to herald the launch of the iPhone 6 – and possibly a larger iPhone 6, and possibly an iWatch too – the event will take place at the Flint Center for the Performing Arts in Cupertino, at 10am. As with previous product launches, Apple will likely live stream the proceedings over Safari, iOS devices and Apple TV.

As usual, Apple is playing coy with the details, and dropping clues to what’ll be announced on its invite. The tagline is “Wish we could say more,” and the graphic is a minimalist slice of Apple logo on a white background; previous event invites have teased the name of the iPhone 5 and the colourful cases of the iPhone 5c. So what does this latest one mean?

It could point to an overhauled version of Siri, to be released as part of iOS 8. Or it could offer clues to the design language of the rumoured iWatch – the launch of which is reportedly being brought forward. Or it could just be that the graphic designer responsible couldn’t be bothered faffing about with colours and just slapped a drop shadow on an Apple logo.

Whatever the case, we’ll find out on 9 September. Let the speculation begin! Or, er, continue.