Nowaday when you think of wearable tech, a band around the wrist fitted with sensors and a screen is probably what comes to mind first. But it doesn’t have to be that way and, unlike other attempts to make wearable electronics that have turned out bulky, it could be quite fashionable. If you have the body for it, that is. 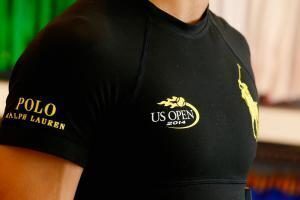 Take a peek at Ralph Lauren’s smart shirt, called the Polo Tech shirt, that is going to be debuting on the tennis court. Tennis player Marcus Giron, who is rated number one in singles matches in the Intercollegiate Tennis Association, as well as ball boys at the US Open, will be wearing the form-fitting black tech-infused tops.

Though they’re only prototypes, the shirts, the creation of Canadian company Omsignal, feature a heart-rate sensor as well as movement tracking functions. The data is collected by a detachable Bluetooth-equipped box that sends info to an iOS app.

Data comparable to that collected by a fitness band can be monitored by the Polo Tech shirt, which might have an Android-supporting version on the way in future. The shirt is expected to officially launch some time in 2015, and possibly a range of other clothing will follow. For the moment it looks to remain form-fitting though, it seems that it’s easier to add tech to clothes that won’t billow about when you move.