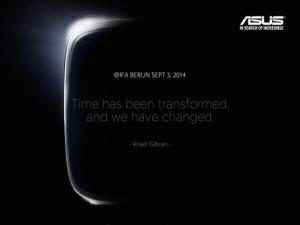 IFA in Berlin is where the world turns to catch a glimpse of the next big consumer electronic devices, and this year’s convention reportedly holds smartwatch developments from Samsung, LG, Motorola… and now, Asus, it seems.

The manufacturer has long been noted as an Android Wear manufacturer, but we’ve yet to actually see the fruits of its labor. Thanks to a teaser image from the company’s Twitter account, however, it appears that news is just around the corner.

“Time has been transformed, and we have changed,” reads the quote attributed to Lebanese-American poet Khalil Gibran on the image. Along with the unsubtle wordplay, the phrase is pasted atop the outline of what appears to be a rounded square of a smartwatch face, and a 3 September date at IFA is noted.

What might Asus bring to the table? According to TechRadar, its CEO has hinted that the company’s Android Wear device will be a lower-priced offering than everything else on the market.

Meanwhile, LG might show the G Watch 2, Samsung’s rumoured Gear Solo watchphone is expected to appear, and Motorola may launch (or at least peg a launch for) the Moto 360 that week at an event in the States. If you’re planning a smartwatch purchase, maybe wait a month.