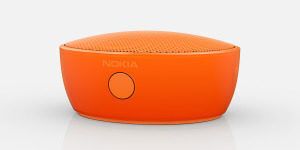 If you guessed ‘sticky’ was the odd one out, well done. But don’t let it go to your head. We’ve seen far too many shower-capable Bluetooth speakers that feature suction cups for a lack of stickiness to be a foregone conclusion. When we say that the MD-12 isn’t sticky, however, we’re not referring to what you might think we are. All will be made clear soon. Hopefully.

Storm in a teacup

The MD-12 is a sturdy little speaker, small enough to fit into a pocket without having to worry about anything but the weight dragging at your pants/skirt/kilt. The top surface is covered in metal mesh, which protects the speaker cones beneath as well as the Bluetooth and Power lights that are concealed there.

Tough plastic, of a very Lumia type, covers the flattened-teacup shaped speaker’s sides, wrapping around the single power button and, on the opposite side, a 3.5mm input jack and micro USB charging port. Very minimalistic all round, in other words.

The base is something else, a rubberised section that should make this little noisemaker non-slip on just about any surface but that is – unfortunately or rather awesomely, depending on how you look at it – not the case. 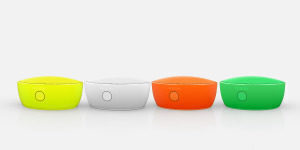 We’ve used Bluetooth speakers this size before and they’re usually inflicted with a lack of bass and a lack of sound in general. One of the better devices in this line is Sony’s SRS BTV5, a little circular Bluetooth speaker that packs enough of a punch of make your room a musical wonderland. Nokia’s MD-12 compares favourably to that unit, even though it has a smaller footprint, and it’s loud enough to make Sony’s speaker push out its lip.

This little Bluetooth speaker offers surprisingly large amounts of bass, but there’s a catch. On its own, the MD-12 isn’t all that effective as far as sound goes. It needs be be resting on a surface, which is something you’d do with the speaker anyway, in order to produce effective bass. The surface dictates what kind of bass you’re going to get and while it can be quite punchy if you’ve got the speaker on a box or hollow wooden surface, more stable resting places result in flatter sound. The best results we saw came from suspending the speaker in between two wooden boxes, where music playback came across like a little subwoofer.

Nokia’s attempt at turning the resting surface into a bass amplifier has its down side. Playing bass-heavy tracks cause the speaker to travel even on completely flat surfaces and it’s not a small amount of deviation. Infected Mushroom’s Poquito Mas vibrated the MD-12 off a table before the track has come to an end.

Of course, this was with the speaker blasting out at full taps. Turn it down and it’ll stop its impression of a Mexican jumping bean but it’s impressive seeing it hop off the edge of the table at least once.

In short Nokia’s portable Bluetooth solution is quite a nifty little setup and you won’t need to have a Nokia to make use of its simple charms and hefty sound. Just a smartphone with a Bluetooth connection, or anything that supports a 3.5mm output, and a wooden surface, for preference. If space is your main concern, then the MD-12 is what you’re after. Just keep an eye on it, it likes to wander off when you’re not looking.