It has gotten to the point where the Stuff team is completely unable to exercise unless there is some sort of musical backing, though song choice has a lot to commend it. It’s a lot harder to hit the weights when the Singin’ in the Rain soundtrack is playing, while hitting the streets with Eminiem’s Till I Collapse blasting in your ears (on repeat) is a good way to run until an appendage drops off.

Of course, to achieve any of this you really do need a pair of headphones suited to the task. Of late we’ve been playing with Jabra’s Sport Wireless+ (or Wireless Plus, if you prefer) Bluetooth headphones, which have been designed with workouts, specifically running, in mind.

The Jabra Sport Wireless+ headphones are compact in-ear music conveyance hardware, fitting around the back of the ear (where the bulk of the Wireless+’s er… bulk can be found. They are connected to each other by a single wire that runs behind the wearer’s head, while they connect to your smartphone and/or one other device via a Bluetooth 3.0 connection.

Included in the box with these ‘phones are a series of eargel fittings, which we’ll get to later, a small clip for adjusting the rear wire and an armband for your smartphone or other Bluetooth-toting music player. The aim is to get you onto the road with your favourite tunes and Jabra have also thrown in a free three-month subscription to Endomondo Premium to make pounding the pavement that much more attractive. 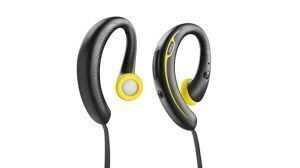 Trying to fit in

We’ve already established that these in-ears are designed for use while jogging or whatever you call that motion when a Stuff writer is attempting to move along at speed. For the most part the Sport Wireless+ stays in place while you’re in motion, no matter what that motion actually looks like. It even stayed secure when a pair of glasses were donned for the run but they’re not exactly what you’d call adjustable.

Most of your fitting comes from the selection of eargel attachments that cover the speaker portion of Jabra’s exercise helpers. Finding the right fit, which will require a lot of trial and error and just perhaps a trip to Jabra’s website to see how you’re actually supposed to use the silicon slip-ons, may take some time.

Even then, if your ears are too small or too large, the Sport Wireless+ may wind up being a poor choice. There’s no way to adjust the headphones themselves, though they are very flexible, so there’s a chance that they may not fit at all if you’re unusually gifted in the ear department. It’s unlikely that anyone will be unable to use them at all, but be prepared for a possible strange fit.

Try as we might, we were unable to get a solid fit from the Sport Wireless+. They were comfortable enough to wear while taking a nap or just doing day-to-day tasks, stable enough to last through an exercise session without popping loose but nothing we tried would make them seal – short of running with our fingers in our ears, that is.

In other words, don’t go into your daily run expecting the sort of sound you’d get from a decent pair of wired in-ear speakers. This is almost completely due to the fact that you’re losing sound to the open air and little to do with Jabra’s speaker quality. If there is a reviewer out there who got a better fit from these little Bluetooth headphones, odds are they experienced better audio as well. We can appreciate that our music still sounded pretty awesome while at speed regardless of the fit and Jabra definitely scores points there.

They also score points for control. The right-hand side earpiece hosts the controls, a Play/Pause/Power button, a volume rocker and a switch for an FM radio, when you’re tired of whatever playlists you have on hand. The power button will play or stop your tunes, shutting down the Sport Wireless+ with a lengthy press. The volume rocker will give you a voice notification on battery levels if there’s no music playing, adjust sound if there is and also skip tracks if you give it a longer press. The volume rocker also seeks when in FM mode, so you can grab the news without slowing down. 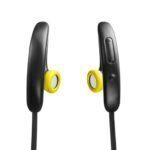 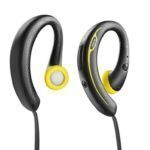 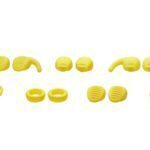 Somewhere out there is a person that the Sport Wireless+ will fit perfectly and when they find these Bluetooth headphone they’re going to be very, very happy. For the rest of us, the fact that they are comfortable, stay in place during strenuous motion and remain powered on for around three or so hours of music-time while still offering decent sound will have to be enough. They’re not perfect, but they’ll be more than adequate until something better comes along.